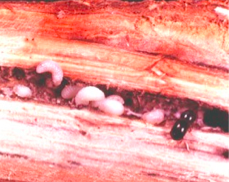 Evidently, readers are concerned about their pecan trees, as our very last article was about how Catawba worms affect pecan trees, and now we are charged with answering a question about a pecan tree infested with large white worms. The reader is wondering what the white worms are, and he is also keen to remove the pest. So, we have a classic identification-and-removal question: what are white worms on our reader’s pecan trees, and how can he get rid of them?

As we often must do, we have to quickly run through why any answer we give will be speculative. First, and perhaps most relevantly, we have no picture to confirm or reject our hypotheses. Second, the reader describes the worms as “large,” but this is a lamentably imprecise word. (How big must a worm be to make it “large?” An inch? Two inches? Etc.) Third, do the worms our reader is finding have any other distinct characteristics, and is it even fully white?

We ask this last question primarily because we are confident our reader didn’t find a worm. Rather, he probably found some type of larva; that is, the larval form of a moth, beetle, or some other type of insect that feeds on pecan trees. Such larvae might have some relevant feature – like a spike, e.g., as in the case of some species of caterpillar – and they might also not be perfectly white. Lots of larvae are essentially white, but not entirely so; they might be more of yellowish or even vaguely brownish color, for instance, even though they could be reasonably described as “white.”

All that said, what type of larva might our reader have found? The first possibility that comes to mind is the Hickory Shuckworm, which despite its name is a type of moth larva. The larvae’s physical characteristics pretty well match what the reader described: they are white and somewhat plump looking, although it would be somewhat unusual to call them “large.” More problematic is the fact that these creatures go after the nuts of the pecan trees, and the reader described the “worms” he found as essentially burrowing into the tree.

This leads us to suppose that our reader might have found Asian Ambrosia Beetle larvae, which look like this:

These larvae bore themselves into trunks and branches, creating tunnels in the tree. (The reader said the creatures he found were eating holes in the tree and were under the bark.) Moreover, Asian Ambrosia Beetle larvae are white. However, like Hickory Shuckworms, it would be a little bizarre to describe them as large (they’re measured in millimeters), unless the reader was referring to the skinny spines made of wood dust that result from their boring activity, which can be a couple of inches long. They do look a lot like white worms sticking out from the side of the tree, and maybe this fact, coupled with the reader finding a few of the live larvae, caused him to describe the creatures he found as “large.” Obviously, we have no idea.

In any case, our best suggestion is that the white worms our reader is finding are Asian Ambrosia Beetle larvae. But before we sign off, what can he do to get rid of them? Unfortunately, affected trees – or at least the affected part of the trees if the problem isn’t bad – have to be cut down and burned so the infestation doesn’t spread to other trees. Indeed, many people end up treating surrounding trees with some sort of insecticide to contain the problem. We generally don’t encourage the use of chemicals, but if our reader is inclined to take this route, he can find plenty of information about it elsewhere. Hopefully the reader’s problem isn’t too bad, or at the very least we hope we’ve help him identify the problem so he can seek solutions to it.

This many people searched for this info: 3,098