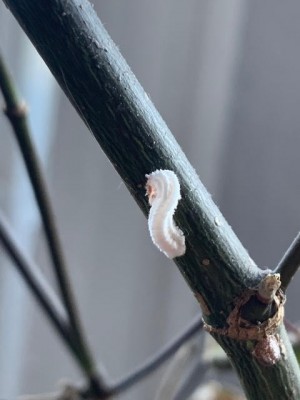 White worms were recently discovered on the trunk of this reader’s Japanese maple tree in New York City. The worms appear to be short in length, fairly large in girth, with ridges along their bodies, and have a pink/beige head. 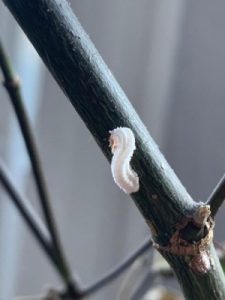 Firstly, our reader also adds that he thinks the worms’ appearance is linked to the fact that he added fertilizer two weeks prior to finding the worms. Secondly, we want to thank our reader for the excellent photographs he sent in. The stellar quality makes it far easier for us to see the creatures’ distinct features and unique characteristics. The most characteristic feature of these critters is arguably their vertical ridges. Usually, when we see segmentation on a worm, the ridges cross the worms horizontally, so this is definitely an interesting case. Because of this feature, we have concluded that these worms are most likely pulvinaria scale insects, otherwise known as hydrangea scales.

Pulvinaria scale insects are actually considered parasites, being parasitic to various trees and sometime shrubs. The females carry around ovisacs (10mm-long sacs full of ova), which is actually what we are seeing in the photographs, which we previously thought were their head. The round, brown/beige parts are not their heads at all, but the ovisacs that the insects drag behind them. These insects can actually cause significant damage to the trees they infest, so our reader should consider dealing with the problem as soon as possible. The rate at which they extract the sap from their host plants and kill them is quite incredible to behold. They are considered a huge threat to mango tree farms in India, and are thus a force to be reckoned with. 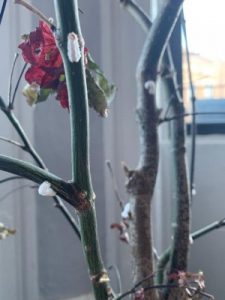 On that note, simply removing the larvae physically from the trees should suffice in dealing with the infestation. Given that the insects carry their eggs around with them everywhere, it’s not like our reader will have to locate any source of infestation, and it will be easy to deal with all the stages of this organism in one fell swoop. Of course, we advise wearing gardening gloves or some other form of protective gear when physically handling any larvae, for even if they are not venomous, one cannot know what type of allergic reactions may occur from skin-to-skin contact.

Contrarily, some sources argue that this is ineffective, at least in the cases that the eggs have already been deposited and are no longer being carried around, but given that this infestation seems to be newly discovered, we think that manual removal of the insects should suffice in dealing with the infestation. The alternative solution seems only to be the replacement of the plant, which is not ideal, or the use of pesticides, which we rarely recommend using for various reasons. Thus, if our reader continues to experience an infestation after manually removing the insects, it might be worth considering contacting a professional to remove the insects. 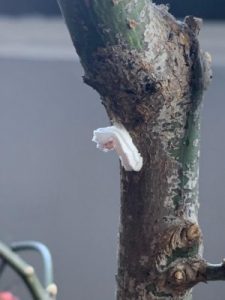 In terms of how they got there, we are not actually entirely sure about it. Pulvinaria insects deposit their ovisacs on the leaves of the plants they host, not in fertilizer. Hence, it is questionable whether or not these insects really did come from the fertilizer our reader added to his maple tree. However, we will not rule it out as a possibility. Otherwise, it might be possible that the ovisac traveled in by some other means, either on the plants themselves, or on something else our reader accidentally carried in when coming inside. In actual fact, it is possible they traveled in on an ornamental plant our reader might have purchased, as this is how they were first introduced to Western countries, being native to East-Asia.

To conclude, the worms our reader found on his Japanese maple tree are pulvinaria insects. These interesting creatures’ looks can be quite deceiving in that they look like regular white larvae with brown heads (a very generic appearance for a moth caterpillar or beetle larva). We are confident that if our reader successfully removes all the visible insects and their ovisacs then his maple tree will be infestation-free.

Article Name
White Worm-like Creatures on Japanese Maple Tree are Pulvinaria Scale Insects
Description
White worms were recently discovered on the trunk of this reader's Japanese maple tree in New York City. The worms appear to be short in length, fairly large in girth, with ridges along their bodies, and have a pink/beige head.
Author
Worm Researcher Anton
Comments: 0 Posted by: All About Worms Categories: Interesting Bugs, Parasite Worms, Worms Generally