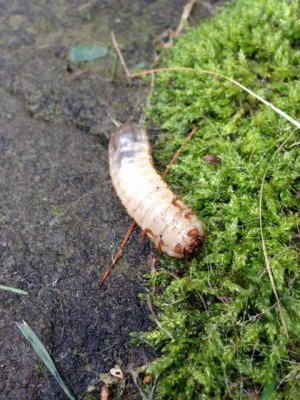 White Worm is a Grub

A reader just sent us this photo of a cream-colored specimen that he found on a slate patio in a New York City. It had recently rained when he discovered this creature near his dog. His description is great, so we will include it here: “It’s white with a brown ‘face.’ It looks like it has several antennae at the front end. Although it’s a pearly white, its rear 25% looks like it contains something dark or black. It ambulates quite nicely.” (Ambulates means move about.)

We are quite confident that this is a grub! In other words, this is the larval form of some insect, most likely a beetle. It is very difficult to determine the species, but we are confident that this grub will eventually mature into some type of beetle. Most grubs are off-white, have brown heads, and six small legs. The grub in the featured photo has all of these qualities. The size of a grub varies depending on species type and age. Some grubs are considered pests because heavy infestations can harm grass and crops. We have heard from readers in the past who have found grubs of acorn weevils in their tree. Acorn weevils are beetles that infest certain trees, including oaks and hickories. However, it doesn’t seem like our reader is having an issue like an infestation of these creatures. It appears that he wrote us out of curiosity.

In conclusion, a reader sent us a photo and asked us to identify the off-white colored specimen featured in the picture. We believe this is some type of grub, or beetle larva. We aren’t able to specify which type of beetle this grub will mature into, since most grubs look very similar. If our reader has any more specific questions about grubs, we invite him to send them in!

Summary
Article Name
White Worm is a Grub
Description
A reader just sent us this photo of a white specimen with a brown face that he found on a slate patio in a New York City. We believe it is a grub.
Author
Dori Franklin
Comments: 0 Posted by: Worm Researcher Dori Categories: Grub Worms