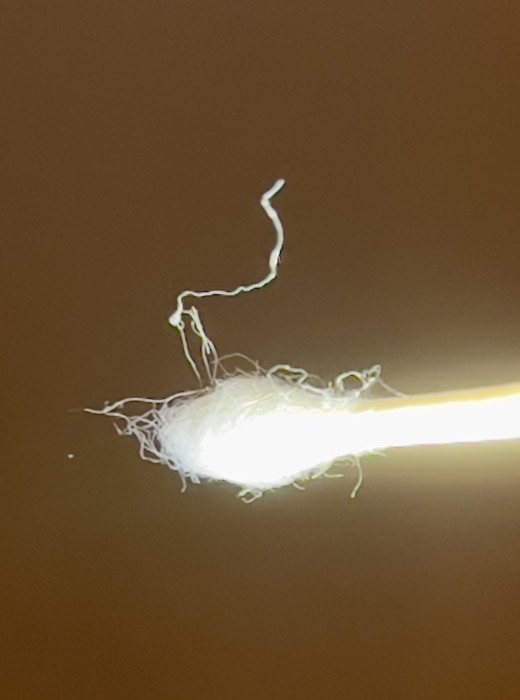 “I found these clear strands (worms?) on every item of fabric in my home”, states this reader in Hawaii. “They are on my clothes, rugs, couches, and towels. EVERYTHING! They attach on one end and stick out of the fabric. They are very thin, like hair, but kind of kinky. At first I thought it was hair or lint, then I looked closer and it was moving, and other lint or hair wasn’t. Normal lint or hair doesn’t stick straight out like these do either. It is not a few here and there; it is an immense amount. I also see dust-like particles all through the air, but I don’t think it’s dust because it maneuvers in different directions and it’s bigger. I have tried vacuuming, laundering, drying, even picking them off but they always come back. I saw that someone else wrote in from Oklahoma about them with a photo and that is exactly them and you didn’t have a clue. I am hoping that maybe you looked into it further and have answers now.”

Now, our reader does not link what article she is referring to, so we do not know what exactly she is comparing these worms to. Nonetheless, we have not looked into stringy-white worms infesting clothing in recent times, so we would not have any new information to provide on that front, nor do we know what it is our reader found in her clothing. Normally when our readers find white worms infesting their clothing, they are clothes moth larvae or flea larvae, but given how thin these creatures are, they are clearly not either of those two species. We might have even been tempted to suggest these were just pieces of lint or hair, if it were not for the video (linked below) that our reader sent in, which shows clearly how the organism moves by itself, particularly in a worm-like fashion. 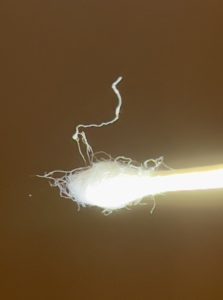 The main thing these resemble are threadworms (also known as pinworms), which are an intestinal parasite. However, these parasites develop inside the bodies of their hosts, and do not roam around the home and infest people’s clothing, so we find it highly unlikely for them to be threadworms. Besides, we are not qualified or legally able to identify parasitic organisms, because such organisms always pose a medical threat and thus require a medical diagnosis: we are not medical professionals. The best thing our reader can do is continue to vacuum her home and launder the infested clothing at the highest temperature the given items can withstand, and repeat this until no organisms are left. We know she has already tried these methods, but sometimes it takes a few times to get all the organisms. She might also want to think about the places she has been going: if they keep coming back after she cleans the house, maybe they are being brought in on something. Or perhaps she has a dog or cat that is bringing them in? Alternatively, to eliminate the worms, she can freeze the items of clothing they are infesting for at least 48 hours and then launder the clothing after defrosting.

To conclude, we are still not sure what these organisms are. We recommend that our reader take some of the worms to her local county extension office to have someone physically examine them, as they might have a better chance at identifying them. We nonetheless hope that she finds something of value in this article and we wish her the very best.

Article Name
White Pieces of Hair and Lint Move Like Worms and Infest This Woman's Home
Description
"I found these clear strands (worms?) on every item of fabric in my home", states this reader in Hawaii. "They are on my clothes, rugs, couches, and towels. EVERYTHING! They attach on one end and stick out of the fabric. They are very thin, like hair, but kind of kinky."
Author
Worm Researcher Anton
Share the knowledge

This many people searched for this info: 312