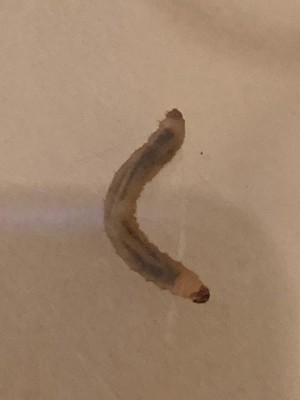 Worms of approximately 1/2-inch long were found in a large mass in the moist mulch of this reader’s garden in Earlyville, Virginia. The worms in question are a clear white color, with dark markings along their bodies, and a bulbous brown mass on either end of their bodies. 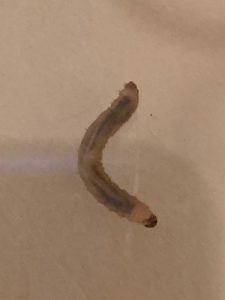 Our reader elaborates and says that they were found on an afternoon in early January after a night of rain. Temperatures were in the high 60s (Fahrenheit), and while many were at the surface, our reader also found the worms at a depth of 6-inches in the soil. He wonders if these worms are harmful to his plants. It is admittedly difficult for us to pinpoint the exact species of these worms. Given the habitat they were found in, as well as their color, we would first assume these were chafer grubs (which are the larvae of chafer beetles), if it weren’t for these worms’ lack of forelegs and the brown color at both ends (chafer grubs only have brown at one end, that being the head). If not grubs, then we would suppose they were some sort of composting worm. They do not resemble any larvae or caterpillar that are harmful garden pests which are commonly found in Virginia. Of course, we could not promise that they are not pests either.

If they are composting worms, our reader will want to keep them around, as they will clean out any of the dead organic matter in the soil and turn it into nutrient-rich fertilizer. It is entirely possible that these worms are simply a type of fly larva (maggots), which are the most common composting worm one can find. On the other hand, if they are garden pests, they will naturally be a threat to the health of our reader’s plants. What we suggest is conducting a mini experiment. Our reader can take a sample of the plant and put it in a separate container full of soil (and preferably a clear box with air holes) and put a few of the larvae in the container with the plant. Make sure the container is big enough for the plant and the larvae. Then, put an identical sample in another container without the larvae. Both containers should be put in the same location so that there is no difference in variables. The only difference between the two containers should be the presence, or lack thereof, of the larvae.

Alternatively, our reader could simply put a couple of the larvae in a container with air holes and some food to see what they grow into. That way, the more they mature, the more defining characteristics our reader will notice. He may then send more pictures to us if he wishes for us to have a second go at identifying the critters. Additionally, our reader could also take a sample of the larvae to his local county extension office, or to the entomology at a nearby university to get a second opinion from an expert. Our reader has plenty of options to choose from, and can even exhaust all of them if he has the energy to.

In conclusion, we are not entirely sure what these clear critters are. They could be some sort of grub or maggot, or something else entirely. One thing is for sure, they prefer soil as their habitat, and our reader’s concern about them is valid. If our reader employs the experiment suggested, we hope he finds it useful and that he gets a result out of it.

Article Name
White Larvae in Virginia Garden Composting Worms or Pests?
Description
Worms of approximately 1/2-inch long were found in a large mass in the moist mulch of this reader's garden in Earlyville, Virginia. The worms in question are a clear white color, with dark markings along their bodies, and a bulbous brown mass on either end of their bodies.
Author
Worm Researcher Anton
Share the knowledge

This many people searched for this info: 1,331