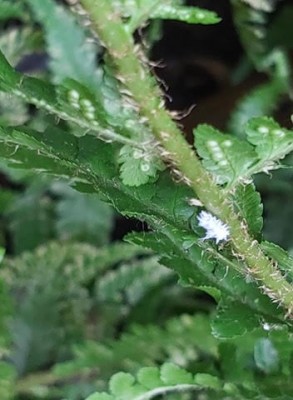 White, Fuzzy Critter on Plant in Belgium is a Mealybug

A white, fuzzy creature was found on a plant stalk in Ghent, Belgium by this reader, who wonders what it may be. According to our reader, the creature is as little as 5mm in length, and seems to be able to cling to the stem with no visible legs. 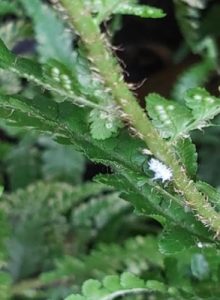 The excellent photographs our reader provided alone tell us that this is a mealy bug. Mealybugs commonly infest houseplants and garden plants. They are often mistaken for mold, as their tiny size and white, fuzzy visage gives them that unassuming appearance. It is quite a clever disguise if you ask us. Upon closer inspection, one should be able to make out lines or ridges across the mealybug’s back, and a curve to its body as it rests against the stems or leaf joints of the plant it is feeding on. Additionally, mealybugs are scale insects, meaning they climb plant stems to suck out the sap of the plant from either the leaves or the stem itself. Scale insects, and mealybugs in particular, have been known to cause unfortunate damage to the plants they infest. It is strange that our reader only found one such mealybug, as they tend to cover plants in hordes, seemingly coming out of nowhere.

Of course, the mealybugs do not come out of nowhere. If found on a houseplant (which is quite common), the mealybugs had either already taken up residence in the plant when purchased from the store, infested the plant after being put outside during warmer weather, been brought in by ants, or come in through contaminated plant soil. With that said, although discovering mealybugs on one’s plants is often a surprise for most plant/garden owners, their actual destruction of the plant is quite slow compared to other scale insects and compared to most species of caterpillar, so one has time to eliminate the infestation and save the plant. Further to this, the life cycle of the mealybug is a mere maximum of ten weeks, but that being said, mealybugs will lay eggs on the plant they are infesting, and so one plant could potentially be host to generations of mealybug families. It’s an ideal picture for the mealybugs, and a sweet idea, but in this deal, the plant is clearly getting the short end of the stick. 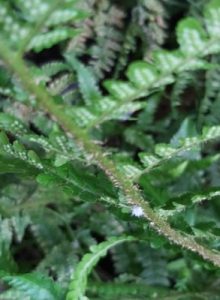 Our reader did not tell us if the plant this mealybug is on is her own, or if it was out somewhere in the wilderness. If the plant is her own, we can recommend to our reader an array of safe and organic methods of dealing with this pest. One such method is adding a sprinkling of cayenne pepper to her water when she waters her plant, as this is an effective way of not only discouraging many creatures from feeding on one’s plant, but it helps eradicate mold as well. Another method is taking cotton swabs soaked in rubbing alcohol and applying the swab directly on the mealybugs, as this will effectively kill them. Further to this, one could also use a solution of water and mild, baby soap and spray down one’s plant as this also effectively gets rid of the bugs. Regardless of the method one uses to eradicate the insects, we also recommend isolating the plant from other houseplants until it is completely free of the bugs so that they do not spread. Checking the insides, outside and underside of the plant pot is also a good idea, as mealybugs will often hide when threatened, and can simply return after one is done treating the plant to infest it again.

Other sources may suggest the use of chemical pesticides, but we do not advocate this, as pesticides and insecticides can often have negative effects on plant, soil and human health further down the line that many do not consider when applying such measures. Taking all of this into account, we wish we could instead recommend simply removing the mealybugs off the plant in a humane fashion, as we seldom encourage killing any living creatures. However, in this case it is difficult to pry mealybugs off the plants they infest, as they are quite sticky to the touch, and given their size and frailty, one would likely do more harm than good and just squash the bugs, thus killing them in the process.

To conclude, the creature our reader found on this plant stem in Belgium is a mealybug. They pose no threat to human health, but definitely to the health of the plant. If one is dealing with an infestation of these (which our reader fortunately does not seem to be), using a solution of water and cayenne pepper is the best way to go about it. so we rather encourage the use of the aforementioned cayenne pepper and water solution when watering one’s plants.

Article Name
White, Fuzzy Critter on Plant in Belgium is a Mealybug
Description
A white, fuzzy creature was found on a plant stalk in Ghent, Belgium by this reader, who wonders what it may be. According to our reader, the creature is as little as 5mm in length, and seems to be able to cling to the stem with no visible legs.
Author
Worm Researcher Anton
Comments: 1 Posted by: All About Worms Categories: Garden Worms, Pest Worms, Worms Facts