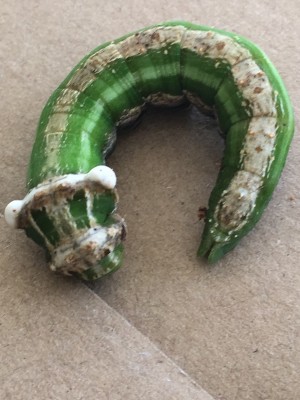 We recently got this message from one of our readers, “I live in a rural area near San Antonio, Texas. I found this caterpillar stretched out along a milkweed vine. Two white bulbous protrusions provide the appearance of eyes that might help protect the caterpillar. Its actual eyes are located on either side of the body, closer to the mouth and below the protrusions. Can you provide an ID?” Along with the message he sent an excellent photograph of the green specimen he found: 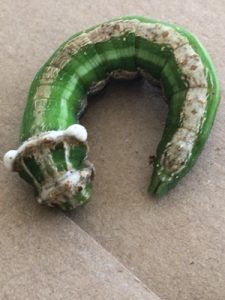 Even though this caterpillar has a unique look, and we know what plant it was on and where it was found geographically, we still aren’t sure what species of caterpillar this is. The monarch butterfly larva is the caterpillar that typically feeds on milkweed, and this definitely isn’t a monarch larva. Monarch caterpillars have yellow, black, and white stripes lining their entire bodies, so they don’t look anything like the creature our reader found. Although we said sometimes caterpillars of the same species can look very different, we don’t think this theory applies to this scenario.

There are two species of caterpillars we think could be a match for what our reader has found, both of which are found around San Antonio. The first is a Giant Swallowtail caterpillar, also knows as a Papilio cresphontes Cramer. This caterpillar has an olive green body with white and brown splotches, helping it camouflage and blend in with its surroundings. However, it primarily feeds on plants in the Citrus family, not on milkweed plants. The other caterpillar is the larva of the Astarte Prominent Moth, a.k.a. Heterocampa astarte. We don’t know much about this species other than its appearance is close to the specimen our reader discovered, and it is found throughout North America including in San Antonio!

To conclude, today we responded to a reader who found a green caterpillar on a milkweed plant near San Antonio, Texas. We think this creature might either be the larva of the Giant Swallowtail or of the Astarte Prominent Moth.

Article Name
What Species is Green Caterpillar?
Description
Today we responded to a reader who found a green caterpillar on a milkweed plant near San Antonio, Texas. We think this creature might either be the larva of the Giant Swallowtail or of the Astarte Prominent Moth.
Author
Dori Franklin
Share the knowledge

1 thought on “What Species is Green Caterpillar?”