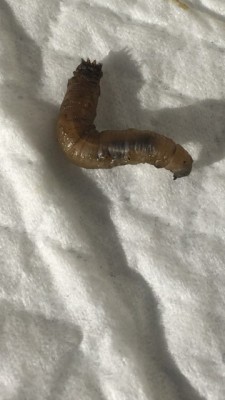 What is Worm Found in Puppy’s Poop?

A reader recently reached out to us from Ireland. She was concerned about something she found in her puppy’s feces. She sent us a photo and asked if we have any idea what the creature might be. The photograph shows a brown organism sticking out of a pile of excrement: 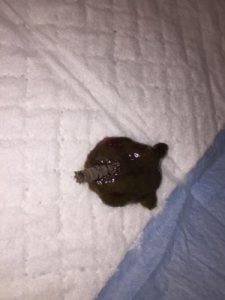 She explained that she cleaned out her puppy’s crate thoroughly in the morning and about an hour later discovered this. The creature was about an inch long and wiggling around, so it was still alive! She was quite worried so she brought the worm to the vet to be examined. However the vet said that he had never seen anything like it before. Our reader also mentioned that the area around the crate is spotless, which makes her think the worm must have come from inside her puppy. Here is another look at the creature: 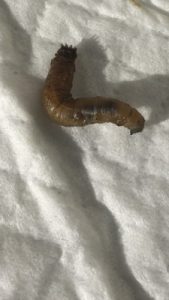 This worm doesn’t resemble a tapeworm, which is a common parasite found in dogs. Tapeworms are tiny and white, so clearly not a match to this specimen. This also doesn’t look like a whipworm or a hookworm, which are also common intestinal dog parasites. Since the vet didn’t recognize this creature, we think it probably is not an intestinal parasite. However, we also know that our reader keeps the crate and the area surrounding it very clean, and believes the worm must have come from the puppy. Perhaps her dog accidentally ate a worm-like organism.

After examining the photo more closely, we think this might be some type of caterpillar based on its size and shape. We aren’t sure if it is actually brown colored, or if that coloring is just the result of going through the dog’s intestinal system. However, we think the small features on its anterior and posterior ends might be hooks, horns, or a tail. We aren’t able to determine what kind of caterpillar this is, or if it is even a caterpillar. If the vet wasn’t worried about the discovery of this specimen, then we think our reader should dispose of it and move on. If she continues to find creatures in her puppy’s feces, or is still worried about the health of her puppy, we encourage her to bring her back to the vet.

To wrap up, one of our readers discovered a worm-like organism in her dog’s feces. We think it might be a caterpillar. We don’t believe it is anything parasitic, but if she finds more, or has any concern’s about her puppy’s health, we advise her to take her puppy back to the vet.

Article Name
What is Worm Found in Puppy's Poop?
Description
One of our readers discovered a worm-like organism in her dog's feces. We think it might be a caterpillar. We don't believe it is anything parasitic, but if she finds more, or has any concern's about her puppy's health, we advise her to take her puppy back to the vet.
Author
Dori Franklin
Comments: 5 Posted by: Worm Researcher Dori Categories: Dog Worms