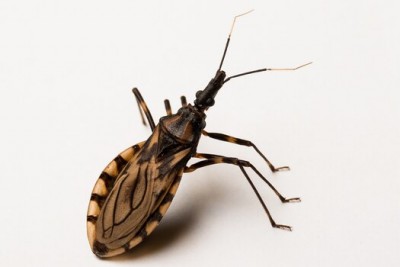 Oddly enough, the kissing bug is an insect few know of, or have even heard of, despite the threat it has posed and potentially poses to many. This article will address what the kissing bug is, and why this is one of the insects that should not be underestimated. 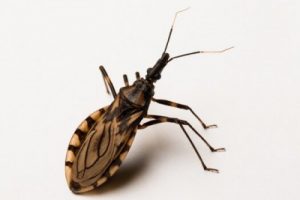 Before we get into the bulk of this article, it should be noted that neither this article, nor kissing bugs in general, has anything to do with the kissing disease/illness mononucleosis (or ‘mono’). There is absolutely no correlation between kissing bugs and mono, so we apologize if any of our readers hoping to find out about mono are disappointed. This article is rather for those that are curious to hear about the kissing bug, and the actual health problems it can indeed spread.

Kissing bugs, properly known as triatomines, are nocturnal insects that feed on the blood of their prey, which includes both animals and humans. Their larval stage looks very much like an adult kissing bug, minus the wings. The larvae are more often referred to as nymphs, of which there are five stages before they are a fully mature kissing bug. To molt into the next stage, a kissing bug needs to have consumed at least one “blood meal”, says Healthline. The kissing bug has no pupal stage, meaning they have no stage at which they would be particularly vulnerable to predators. 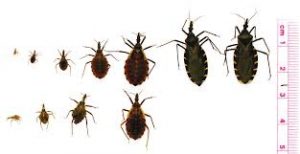 Furthermore, if any of our readers are prone to paranoia or already have trouble going to sleep, we recommend stopping here. As in, right here, now. Kissing bugs feed on their prey by biting their faces. Mind you, these insects are not tiny either, and are easily visible to the naked eye. In the case of a human, the kissing bug would crawl onto your face while you are sleeping and bite your face, and not just once, but up to 15 times during the course of 20-30 minutes. To feed, the kissing bug injects their mucus through their bite into the prey’s skin, which has sleep-inducing properties which disable the victim from waking up from the bite.

What is dangerous about kissing bugs is that more often than not, they carry a parasite called Trypanosomo cruzi. The parasite is transmitted via defecation, something that kissing bugs do on the wound they leave behind after biting their victim several times. However, the faeces might not always permeate the skin through the bite, but can still be transmitted if one touches the bite and then rubs ones eyes, nose or mouth. If the parasite is transmitted, it can cause Chagas disease in the victim. Kissing bugs only transmit the parasite themselves from biting an already infested person or animal, creating a vicious cycle where no animal or kissing bug is left happy.

Chagas disease is native to Mexico, Central American and South America. The CDC reports that approximately eight million inhabitants of these regions will have contracted Chagas disease. Furthermore, it has even spread to the United States, though it is not as prevalent there. Although Chagas starts out with flu-like symptoms, and then moves on to a chronic stage of no symptoms (because a lot of the parasites have died), Chagas can eventually lead to sudden death if untreated. The problem is that many do not know they have Chagas until it is too late, especially due to the chronic phase, and due to the fact that symptoms might not show up for over a decade.

In addition to this, kissing bugs pose another health threat: possible allergic reactions. Just like with any insect or animal, no one can know what reactions might occur upon skin-to-skin contact. According to Healthline, one can experience “anaphylaxis” upon being bitten, which is an allergic reaction that causes difficulties in breathing and lower one’s blood pressure to “dangerous levels”. This reaction demands immediate treatment or death may follow.

To conclude, the kissing bug is a dangerous insect endemic to the Americas which can cause severe allergic reactions, as well as transmit a parasite carrying a life-threatening disease. If any of our readers want even more information on the kissing bug and/or Chagas disease, we urge them check out Healthline, which we previously linked. Their thorough text on the matter is definitely worth checking out. Finally, although the best one can do to prevent being bitten by a kissing bug is to ensure that one’s home is properly sealed and protected from insects wandering or flying in, there is unfortunately not much one can do to prevent a kiss from the kissing bug.

Article Name
What is the Kissing Bug, and Why People Rightly Fear It
Description
Oddly enough, the kissing bug is an insect few know of, or have even heard of, despite the threat it has posed and potentially poses to many. This article will address what the kissing bug is, and why this is one of the insects that should not be underestimated.
Author
Worm Researcher Anton
Share the knowledge