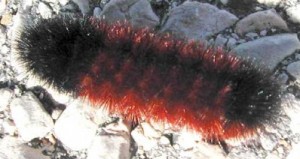 It is believed that the amount of black on the banded woolly bears body predicts how severe the upcoming winter will be. This is, of course, common folklore as there is no scientific evidence to prove this. The eggs may vary in color from red to black, and once the eggs hatch to reveal the larva, the black bands may actually decrease in size as the larva grows.

1 thought on “What is a Banded Woolly Bear Worm?”