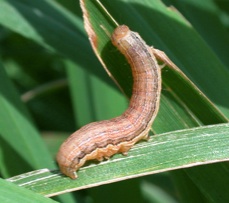 The army worm is about 1-1/2 inches long when it is full grown. They are can range in color from light tan or green to black. The army worm has a prominent inverted Y on the front of its head. The adult moth has a wingspan of about 1-1/2 inches and the hind wings are grayish white. The first pair is dark gray mottled with lighter and darker patches. The adult moth also has a white spot near its extreme tips. Much like its larvae, the moth is mainly active at night.

About Army Worms, Treatment and Prevention

The army worm lives mostly in the southern United States, South America, some islands of the West Indies, and the tropics of Central America. The army worm can only survive the winter in the tropics and the warm Gulf areas of the U.S. The adult army worm migrates each year to the northeastern part of the United States between early and late July.

Army worms can occur in large numbers in late districts. They can occur without warning and they can do major damage to crops in a short period of time. The army worm climbs into trees in the spring when buds are developing. They will destroy all or part of the blossom clusters and newer leaves. Although this is not a regular occurrence, later generations of army worms will attack fruit and foliage all the way up to harvest.

Army worms typically infest fruit trees and vegetable crops. In addition to corn crops, army worms will feed off of cotton, peanut, and alfalfa sprout crops. Army worms are active at night, so to see one would be a rare occurrence. While army worms are considered pests overall, they are particularly troublesome in fruit trees and orchards that may be covered in leaves and excessive overgrowth. Because overgrowth keeps the area dark, it encourages early worm development. It is easy to conclude that you have an army worm infestation by simply examining the condition of the leaves and fruit on trees. The surface of the fruit will be eaten away and foliage will appear tattered or stripped.

The best way to prevent major infestations is by controlling ground vegetation and overgrowth. To determine if you have an army worm problem, check for stripped foliage or buds. Begin looking for cutworms at night to see if they are responsible for the damage. In general, serious damage occurs only in areas with overgrown ground covers.

Army worms also have natural predators, so in many cases, you won’t have to do anything to control populations. Insecticides should be used as a last resort. It is important to keep in mind that a population level of more than 15 percent of damaged plants in plants early stages is cause for action.