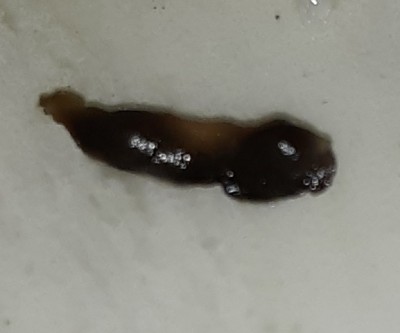 Share the knowledge
We recently received a few photographs from a reader who asked, “Can you help me identify these?” She didn’t explain where she found these worms or provide any description other than the photos. The first picture shows a slimy dark brown worm: 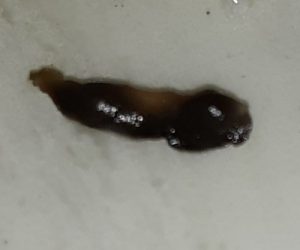 We aren’t sure about the size of this creature because there isn’t anything in the photo to compare it to. We also don’t know where our reader discovered this specimen. Did she find it in her home? In her yard? In the bathroom? In her kitchen? These details can be crucial to identifying worms and worm-like organisms since different species tend to inhabit different areas in and outside of a home.

Based on the slimy appearance of the specimen, we think it might be a flatworm. Flatworms, or land planarians, belong to the Geoplanidae family. There are about 1,000 species known worldwide. Depending on the species, they can vary a lot in appearance, but most are carnivorous creatures that feed on invertebrates such as earthworms and snails, and even other flatworms!

Based on the photo, we aren’t convinced that this is definitely what our reader is dealing with, but we think it is a possibility. Let’s take a look at the other photograph: 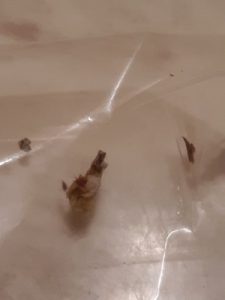 We aren’t entirely sure what we are looking at in this photo. This might be three additional specimens or the creature in question might just be the large object in the middle. It doesn’t look anything like the organism in the first photo, and it definitely doesn’t look like a flatworm.

Unfortunately, we can’t help our reader identify these specimens without more information. As we mentioned above, knowing the specific location where she found these specimens would be really helpful, as well as knowing where she is geographically located, since some species of worms are only found in certain regions and climates. If our reader is still curious about these creatures, we encourage her to reach out with more information!

In conclusion, we aren’t sure about the identity of the specimens our reader discovered. One looked a little bit like a flatworm, but the other one (or ones) did not. We need more information in order to figure out what these creatures are.

Article Name
What Are Slimy Brown Worms?
Description
We aren't sure about the identity of the specimens our reader discovered. One looked a little bit like a flatworm, but the other one (or ones) did not. We need more information in order to figure out what these creatures are.
Author
Dori Franklin
Share the knowledge

1 thought on “What Are Slimy Brown Worms?”

This many people searched for this info: 2,469