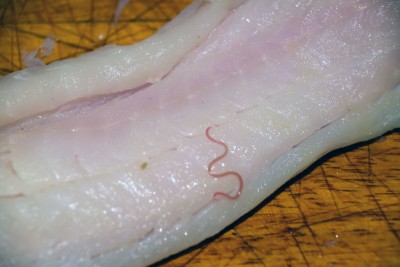 What Are Cod Worms?

If one were to look up ‘cod worms’ on the internet, one would be met with a plethora of woeful tales of people finding worms in their fish. Ranging from personal accounts posted on social media to articles published on news sites, the cod worm has made quite the buzz on the internet. 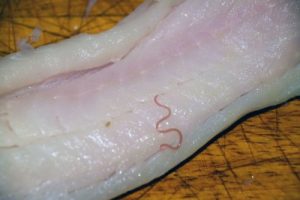 Cod worms, otherwise referred to as herring worms, are the larval form of the crustacean Lernaeocera branchialis, and are a species of roundworms. This implies that they are nematodes, which are marine parasites which are — usually — microscopic; in this case, they are not. They live in saltwater bodies and will accordingly infect saltwater fish, such as cod, herring and halibut; they can also infect human beings as well through the digestion of roundworms or their eggs. Unfortunately, finding them in one’s store-bought fish happens very often and is a plague on the fish industry. Even after cleaning and close inspection, these worms and their eggs can go completely unnoticed until the consumer has bought it off the shelf in the supermarket and brought it home. Despite there being cases of people returning the infected fish and getting a refund, finding worms in one’s fish is likely not a pleasant experience, and could potentially deter one from making that same purchase again.

So, how does one deal with finding cod worms in one’s fish? Well, there are several options, some of which include the eradication of the parasites in the fish. Normally, we do not condone killing worms, but we feel that this is a special case. This is the food one might be feeding to their whole families and to their children, and since humans are at risk of being infected by roundworms, this is a matter of health and safety. If any of our readers has cause to believe they have been infected with cod worms (roundworms/nematodes), we urge them to consult a medical professional as soon as possible in order to get the proper advice and treatment. We cannot directly help any of our readers who may be infected with roundworms, or any parasite for that matter, as we are not medical professionals and are not qualified to do so.

That being said, we will nonetheless list the options available for handling the discovery of roundworms in one’s fish. Firstly, one could return the fish to the supermarket and get one’s money back. That is perhaps the easiest and least time-consuming option. However, even if one bought the same item again, it is not impossible that worms, or worm eggs, will also be present in that fillet. Secondly, one could freeze the fillet ahead of time, which would kill any parasites in the fish, and then remove any visible worms afterwards before cooking. A helpful thing to know is that if the worms are moving in the fish after purchase, the fish has not been pre-frozen and is fresh, but if they are not, it is possible the fish had previously been frozen. So, these worms can actually help with determining the freshness of that supermarket’s fish! Thirdly, one can remove the fish immediately, skip freezing, and cook the fish thoroughly, as this will also kill any parasites in the fish. This option is more suitable for those who buy the fish on the same day they are going to eat it. Finally, one can eat the fish without removing the worms, cooked or raw, but then one is willing to accept the risk of infection, which can potentially lead to either regurgitation of the worm or intestinal infection. We do not recommend this last option.

In conclusion, cod worms are a species of roundworms, and are common parasites of saltwater fish. They can be found in store-bought fish and can potentially infect humans upon digestion. We advise caution to all our readers who consume fish, and that they take care in ensuring they are not putting themselves at risk by checking their fish after purchase. This is also a good time to remind those that consume raw fish to be extra careful with their inspections of their meal, as one is at a far greater risk of infection in this case. Best of luck to all our fish-consuming readers!

Article Name
What Are Cod Worms?
Description
If one were to look up 'cod worms' on the internet, one would be met with a plethora of woeful tales of people finding worms in their fish. Ranging from personal accounts posted on social media to articles published on news sites, the cod worm has made quite the buzz on the internet.
Author
Worm Researcher Anton
Comments: 0 Posted by: All About Worms Categories: Parasite Worms, Round Worms, Worms in Humans