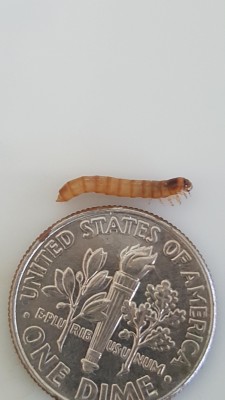 “I have two kinds of mealworms” says this reader, “one is small, the others are larger”. He provides no photographs of the worms but asks “what kind are they?”

Without any photos and so little context to go on (the text above being the only thing our reader wrote to us), it will be virtually impossible to tell our reader exactly what species of mealworms these two sets are. In fact, it would be difficult even with pictures, as there are over 20,000 species of mealworms. To put this into context, mealworms are the larvae of darkling beetles, which is a family of beetles that tend to seek out dark, small spaces (hence the name). Many attribute their name to their nocturnal nature, but it has been noted that multiple species of darkling beetles do come out at daytime. Additionally, darkling beetles are also considered flour beetles, which are a set of beetle species that feed on grains. And like the adult beetles, their larval forms (mealworms) share the same diet. They will also eat decaying organic materials, such as rotting plants or animal carcasses. Mealworms are a pest that one will usually find in the kitchen or basement. Their coloration varies, but the most standard physical appearance of a mealworm constitutes a length of 1/8-inches and a yellow coloration, with brown stripes segmenting its body. In addition to that, mealworms have six small prolegs that are barely noticeable until one looks closely at one. 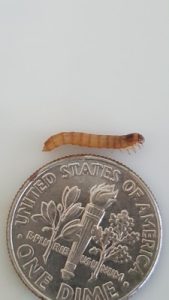 Photograph of a Mealworm from a Past Article

With all of that in mind, there is still no definitive answer we can give our reader as to what kind of mealworms he found. However, what we can recommend is that our reader put one mealworm from each species in separate containers with air holes and some food (some kind of grain preferably) and see if they make it through pupation. Once they have emerged as a full-grown beetle, our reader can send some pictures to us. Once they have fully matured, it may be easier to tell the species apart. Otherwise, if our reader is eager to get answers now, he is welcome to send us pictures of the larvae and we can try our best to tell them apart, though we cannot promise that it will be possible. Lastly, our reader may want to keep in mind that if the only difference between the two kinds of mealworms is the size, then they may not be different species, but the same species at different states of maturation. Alternatively, they could simply just be different sizes for genetic reasons. Though we cannot say for certain without photos, this does seem more plausible than two different species of mealworms entering (or potentially infesting) someone’s home at the same time.

To conclude, we cannot say what kinds of mealworms our reader found, as not only did he not send any photographs of the creatures (or provide physical descriptions of them), but there are thousands of species of mealworms, and, generally speaking, they all look similar. Nonetheless, we hope that this article proves useful to our reader to some degree, and that if he does raise two of the mealworms, he gets the answers he is looking for.

Article Name
Two Kinds of Mealworms Found by Reader Who Wonders What Species They Belong To
Description
"I have two kinds of mealworms" says this reader, "one is small, the others are larger". He provides no photographs of the worms but asks "what kind are they?"
Author
Worm Researcher Anton
Comments: 0 Posted by: All About Worms Categories: Meal Worms, Pest Worms, Worms Found in the House