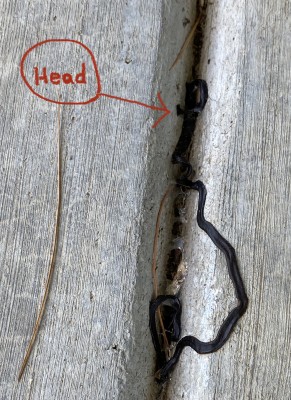 Two hammerhead worms were found on this reader’s patio in Oak Ridge, Tennessee within the span of two years. The first one is very long and black in color, while the second one is shorter, with a beige-brown body. 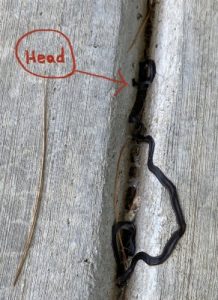 Our reader adds that the first hammerhead worm was discovered climbing up the retainer wall of our reader’s patio in August 2018, while the second one was found dried up on the patio one morning last July. Now, while we are thankful for the excellent photos, as well as the context our reader provided, she did not actually ask any questions. For that reason, we do not exactly know the purpose of the submission. It could be that our reader simply wanted to share some photographs of hammerhead worms for us to add to our library, and in that case we are very grateful. Nonetheless, we will add some general information on hammerhead worms here in the case that our reader wishes to know more about these critters she found on her patio.

We wrote an article on hammerhead worms and what they are back in April, and our reader is welcome to check that out if she wants a more in-depth look at these creatures, but generally, there are a few interesting key points about hammerhead worms we will go over here.

Secondly, hammerhead flatworms are predatory creatures, and their diet consists mostly of earthworms, snails/slugs and the larvae of other insects, which they consume in dangerous numbers. For that reason, a number of species of hammerheads, such as the New Guinea flatworm, are considered environmental risks as they pose a threat to the extinction of certain species that they prey upon. The reason hammerhead worms are so efficient at killing their prey is down to some pretty incredible abilities they have, as well as them being generally quite clever, if a worm can be clever. 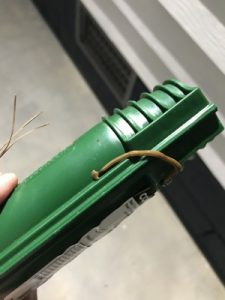 When hunting snails and slugs, hammerhead worms simply follow their trails until they find them, but when it comes to other animals, such as insect larvae or even other hammerhead worms, they are able to track them using their chemoreceptors, which are located underneath their spade-shaped heads. What these do essentially is track the biological signatures left behind by their prey. For example, one such signature that they can detect is the increase or decrease in pH levels left behind by their prey. Once the hammerhead worm has caught its prey, it first secretes a sticky substance which paralyzes their prey. After that, it secretes another substance onto the worm that, quite literally, dissolves the animal. Upon the animal being liquefied, the hammerhead worm can simply slurp up its prey like a meat smoothie. Although this sounds disgusting, it is admittedly amazing at the same time.

To conclude, we thank our reader for sending in these photographs of the hammerhead flatworms she found on her patio. Despite not knowing what purpose our reader had for sending in her submission, we hope that this article was enlightening to some degree. If our reader does have questions she would like to ask about these hammerhead worms, she is welcome to leave them in a comment down below.