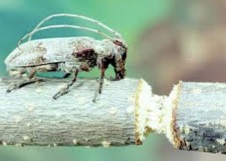 Twig Girdlers: The Insects that Eat Through Trees

Not long ago, a reader sent us a question about a worm or bug that eats through trees. More precisely, he said the creature eats a circle around a tree limb, causing the branch to fall to the ground. We were perplexed by this question because we had never heard of any sort of bug that eats around a tree branch, and we certainly had never heard of any worms (our specialty, after all) that could do so either. However, we have recently discovered that the insects that eat through tree branches are twig girdlers, which is about as fitting of a name as one could ever hope for – twig girdlers, well, girdle twigs. Twig girdlers are beetles, making them insects, not worms. Twig girdlers, or Oncideres pustulatus, are interesting creatures, so we decided to put together some basic information about them.

Although they are overall light to dark brown in color, the bodies of twig girdlers are peppered with orange, yellow, and pink dots, and they also have a grey stripe across their wings. The beetles are about a half an inch or so (1-2 centimeters) long and have long antennae. However, this physical description probably won’t cause you to spontaneously identify a twig girdlers. Rather, ye shall know them by their fruits, and their fruits are girdled (chewed around) tree branches.

Only adult female twig girdlers chew around branches. They (along with the male adults) appear as early as August or as late as October, and then after mating they find a host tree to girdle. Many species of tree can serve as a host, including elm and pecan trees, as well as several types of fruit trees. After eating a groove around a branch, they lay their eggs in the notches created by this process. The larvae hatch after a week and tunnel below the bark, where they eat and grow until the following summer. Despite the fact that a whole new generation of twig girdlers comes into existence in a branch, the limbs that adult female beetles eat around are small – they are only about a half an inch (10 millimeters) thick. Because twig girdlers only go after the small branches, they don’t cause massive damage to trees. To be sure, the limbs they go after eventually die and fall to the ground, but this doesn’t hurt the overall health of the tree, and they are small branches anyway.

Before concluding, we should mention how we learned about twig girdlers, given that we hadn’t even heard of them as little as a week or so ago. When we can’t answer a reader’s question, we very often turn to our global audience of readers. This has helped us on a number of occasions, including most recently with twig girdlers, and that is how we learned about twig girdlers. Now we know, and more importantly now you know, that if you ever find an insect eating a circle around a branch, you can be pretty certain it’s a twig girdler. Many thanks to our commenter, D Gring, for his identification assistance.