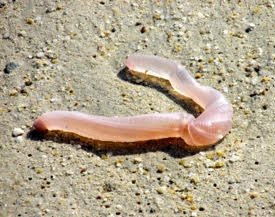 A reader sent an excellent picture of a transparent worm on a beach in Thailand. Technically, the worm isn’t really transparent because you can’t simply see directly through it to the objects behind it, perhaps in part because it is faintly red, so we suppose it is more like a translucent worm, one whose skin is not a solid color, but definitely isn’t entirely see-through either. The reader was first of all wondering if she had found a worm at all, and if so, she asked us to identify exactly what kind it is. What type of translucent red worm might be found on a beach in Thailand?

First, here is the picture of the worm that the reader sent in:

Unfortunately, there isn’t really anything in the image to give it scale, but it appears to be a decent size, probably a few inches long. As you can see, it is hard to judge just how see-through it is because what lies behind it (sand) is fairly uniform and undefined. Nevertheless, you can see its skin is unusual and distinct – it almost looks like a gummy worm – and it certainly doesn’t look like, say, an earthworm, which aren’t translucent in the slightest.

As we have implied by our use of “worm” so far, we do in fact think our reader is finding some sort of worm, although it is extremely difficult to say what kind she might be finding. Based on the shape of its body, it appears to be a nematode (that is, a roundworm), which can be found in virtually every place in the world. Since the worm was found on a beach, it could be terrestrial or marine. It might also be like a lugworm, which live under the sand in the shallow waters, which makes them marine worms, although this sand is exposed during low tide. (It did cross our mind that our reader found a lugworm simply because these are relatively common worms that live on beaches, but it turns out that their distribution is limited almost exclusively to Europe and North America.)

To say that our reader found a nematode, however, hardly limits the range of possible creatures she might have found. There are over 25,000 known species, and it is estimated that the total number of species is around one million. (This is one reason worm identification is so hard – the number of different species is overwhelming in the extreme.) However, we don’t have a more precise answer to offer – we simply have no idea what exact species she might have found. She might consider asking some of the locals, who may have some idea of the worms that live in the area. Or, if there is a university nearby, perhaps it runs something like an extension program that posts information about local worms, insects, and other bugs online, although maybe this sort of thing is only associated with U.S. universities. Finally, and as always, if any of our readers have an idea what this might be, feel free to post a suggestion in the comments below.

Article Name
Transparent or Translucent Worm on Beach in Thailand
Description
What type of translucent red worm might be found on a beach in Thailand?
Author
All About Worms
Share the knowledge