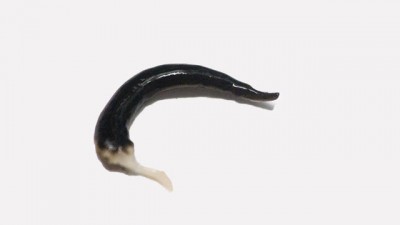 July 13, 2018
We recently heard from a reader in North Port, Florida. He explained that he found a worm-like organism on his kitchen floor. His dog stepped on the worm and then brought it into the house attached to his foot, damaging the creature in the process. He wants to know if the specimen is a toxic flatworm and if it is a danger to his dog. The photograph shows a black worm-like organism with a white tip. We believe the white tip is the damaged area that his dog stepped on:

Our first thought is that this creature has a lot of similarities to a leech. The body shape and color are a match and although we don’t know the exact size because there is nothing to scale the organism against, we reckon it is roughly the same size that a leech would be. However, the body of a leech is lined with muscular segments. The body of this specimen is completely smooth. Therefore, we think our reader was on to something: this is not a leech and probably is a terrestrial flatworm.

Now on to our reader’s next question: Does this worm pose a threat to his dog? As we mentioned above, terrestrial flatworms attack earthworms, but they don’t eat or attack mammals, so our reader’s dog should be totally safe. There are other species of flatworms that are indeed parasites and can be dangerous for both dogs and humans, like tapeworms, but we are confident that this is not what our reader found in his kitchen. Of course if he is worried about his pup’s health, he should visit a vet for an expert opinion on the matter!

To end, a reader’s dog accidentally transported a terrestrial flatworm into his kitchen. We are confident that this creature isn’t a threat to him or his dog.

Article Name
Toxic Flatworm or Leech?
Description
A reader's dog accidentally transported a terrestrial flatworm into his kitchen. We are confident that this creature isn't a threat to him or his dog.
Author
Dori Franklin
Comments: 0 Posted by: Worm Researcher Dori Categories: Flatworm, Leeches