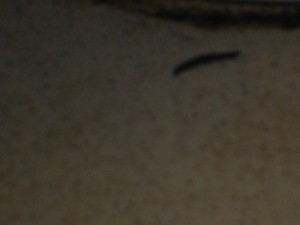 Tons of Small Worms by the Toilet

A reader wrote to us a few days ago about some small worms (or “little tiny worms,” to use the reader’s exact phrasing) she is finding by her toilet. The small worms are black, or at least they appear to be black or some other dark color. (See the picture below.) The reader has found dozens of the worms by her toilet, so she clearly has an issue that needs to be addressed, and she is eager for information about the creatures she is finding. What are the small, black worms by the toilet our reader is finding, and what must she know about them?

First, here is the picture our reader submitted along with her question:

Obviously, this isn’t the clearest picture, but at least the worm in question can be seen in outline. As we mentioned above, it looks black, although this could have to do with the lighting of the photo; in any case, it is probably a dark color. We can’t tell what its precise size is, but it must be pretty small to warrant the adjective “tiny.” Because of the limitations of the photo, our answer is speculative, but we’re reasonably confident that we know what our reader is finding.

For convenience, we’ve been using the word “worm” to describe what our reader found, but in fact she is probably finding larvae. More exactly, she seems to be finding moth fly larvae, creatures we write about all the time because of the frequency with which we receive questions about them. (This alone supports the moth-fly-larvae hypothesis – the larvae are a very common household pest.) Generally, moth fly larvae have a lighter body color than the creature pictured above, but they can be dark, and we aren’t really sure how dark the creatures our reader is finding are anyway. Everything else about the “worms” suggests they are moth fly larvae.

Most relevantly, our reader is finding them around the toilet, which is exactly where one might expect to find them because they feed on decaying organic matter. They are especially fond of drains, where this matter can accumulate (often clogging a pipe), which is why moth flies are also called drain flies. We have no idea what the reader’s bathroom setup is, but it could be the case that the adult moth flies are laying eggs in or around a clogged (or partially clogged) drain near the toilet. Once the larvae hatch, they could feed on the matter in the drain, but they might also crawl to other areas of the bathroom for food, which could be found around a toilet if the area hasn’t been cleaned in a while. (Without getting into the specifics, there could be organic matter in this area.) Of course, the reader’s exact situation could be different, but the bottom line is that moth fly larvae are frequently found in bathrooms, and there would be nothing unusual about seeing several of them crawling around the toilet.

Again, we aren’t certain our reader found moth fly larvae, and unfortunately the picture doesn’t really help us confirm our suspicions, but it doesn’t disprove our hypothesis either, and we have plenty of reason to suppose our reader did find this type of larva. Our reader should clean the bathroom thoroughly, unclogging drains and eliminating any other potential food source. If this is done thoroughly and properly, the life cycle of the moth fly will be broken and she should stop finding tons of small creatures crawling around her toilet.