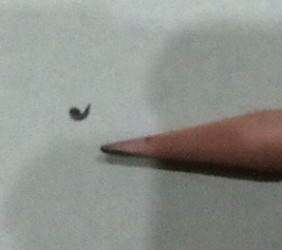 A reader wrote to us a few days ago to ask about some tiny worms he found coming out of what appears to be his shower drain. (The reader said the worms came out of his “water floor trap,” but based on the pictures he submitted, we are pretty sure this means the worms are in and around the shower drain.) The reader said the worms look like earthworms, but are “very tiny,” and indeed they are, as you’ll see in a moment. Naturally, the reader was curious what he found, so he submitted some pictures to us for “analysis,” asking us to identify the tiny worms in the drain if possible.

The reader submitted three photos with his question, but only one of them even partially shows the creature:

In the other pictures, like the one that shows the shower drain, the worms appear as nothing more than specks. The image above isn’t much better, but thanks to the pencil, there is scale, and in any case you can tell the picture is of some sort of worm or worm-like creature.

We say “worm-like creature” because in this case the reader likely found a larva, not a worm. More precisely, he likely found a moth fly larvae, which are commonly called drain fly larvae because this is where they are often found. Moth fly larvae are also quite small – they are often only a few millimeters long – which is consistent with the creature picture above. In order to make a more definitive identification, we would have to see the creature up close, but based on the circumstances, we think there is a good chance our reader found moth fly larvae.

And if he did find moth fly larvae, he needn’t panic. (The reader actually didn’t express any concern about what he found, but most people who find worms in their house want to know if they have a problem on their hands.) The presence of a few moth fly larvae is nothing to be concerned about, and based on the reader’s pictures, there aren’t many around. Indeed, moth fly larvae can be beneficial in small populations because they can help prevent drain clogs. They feed on decaying organic matter – basically, the stuff that accumulates in drains (among other places) – breaking it down in the process. However, if there tons of larvae crawling around one’s drain, as well as adult moth flies hanging around your bathroom, they can become a pest, and the best way to get rid of them is to simply eliminate their food source – the organic matter in the drains. Using something like a plumber’s snake, which is basically an elongated toilet brush, is often the best way to do this, although a plunger might also release the clog and therefore the accumulation of organic matter.

We aren’t certain our reader found moth fly larvae, but this is definitely the most promising suggestion based on the information we were given. Hopefully the reader’s situation is under control, and if the larvae need to be taken care of, this is generally a fairly straightforward process.

Article Name
Tiny Worms in Shower Drain
Description
A reader wrote to us a few days ago to ask about some tiny worms he found coming out of what appears to be his shower drain.
Author
All About Worms
Comments: 0 Posted by: Worm Researcher Evan Categories: Pest Worms