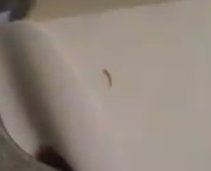 We received a video through the All About Worms Facebook page the other day of what appears to be a tiny worm on a roll of toilet paper. (The tiny worm is likely a tiny larvae, but more on that below.) The reader was quite alarmed by what he found, and mentioned (presumably, and hopefully, in jest) that he is “tempted to burn his house down” immediately because of what he found. For practical, legal, and moral reasons, we don’t recommend this course of action, and in fact we don’t think he should be concerned at all. He appears to have found a very small inchworm, the larval form of a geometer moth, for reasons we outline below.

As we mentioned, the reader sent us a video, but to keep things simple we just took a screenshot of the video to give you an idea of what our reader is dealing with:

The creature is so tiny we zoomed in a bit, which unfortunately makes the photo a bit blurry, but it is the only way to make the larvae even approximately visible. What this photo doesn’t show is the movement of the larva, which was “inching” its way across the toilet paper, and this is why we think he found an inchworm. (As we noted above, inchworms are the larval forms of moths, making them caterpillars.) We detail this in greater depth in an article we wrote about red inchworms, but essentially inchworms do not have legs on the middle part of their bodies. Thus, they use their front legs to grasp the ground and then move the back end of their bodies forward, raising the middle part of the larva’s body in an arch. The prolegs on the posterior end of the larva’s body then grasp the ground, allowing the larva to extend the front end of its body forward. These movements aren’t necessarily executed in a linear way. They can be somewhat sporadic, with larva standing on its “hind legs,” a la a bucking bronco, for a while as it figures out where to plant its front, thoracic legs. This is precisely what is depicted in the video.

There are tens of thousands of species of geometer moths, and hence there are tens of thousands of species of inchworm, so we can’t identify the precise species our reader found. However, the inchworm would certainly appear to be in the earlier part of its life given its size. (Evidently these creatures are out and about at the moment, as we just answered a question about very small “worms” in a bed that we think are inchworms as well.) If our reader wants to research what he found further, he should look for species of geometer moths that live in his part of the world. (We don’t know where this is.) There are many types of inchworms, but they aren’t equally common and they also aren’t equally distributed across the globe.

So, we think our reader found an inchworm, and we don’t think he should burn down his house. The inchworm he found should present no danger to him, and if he only found this one larva, he clearly isn’t dealing with any sort of infestation. Like any number of insects, inchworms can sometimes find their way into a house, and this is nothing to burn the house down over.

Article Name
Tiny Worm on Toilet Paper
Description
Our reader appears to have found a very small inchworm, the larval form of a geometer moth, for reasons we outline below.
Author
All About Worms
Share the knowledge