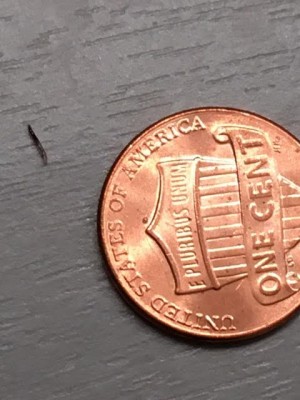 March 19, 2018
Today we will discuss a small creature one of our readers found near her window. She explained that she found the worm-like organism in her bedroom. She is curious about what this specimen is, and is a little nervous that it might be parasitic. The photograph she sent us shows the creature next to a penny, which is excellent because now we have a solid idea of the size of the specimen: 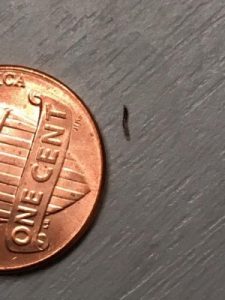 The creature is minuscule! We can see that it has a thin, black body. We don’t see any other physical traits, like legs, antennae, or body pattern. Of course this doesn’t necessarily mean that they don’t exist, the creature is just too small to be able to see! It is useful to know that our reader found this specimen in her bedroom and not her bathroom or kitchen because the specimens typically found in each of those room vary. For example, drain fly larvae, which are small black creatures that look similar to this one, are often found in bathrooms and kitchen sinks, but it is unlikely that they would be living in a bedroom.

We aren’t sure what exactly this creature is. Based on the size, we think it is probably some type of larvae, but we aren’t entirely sure. As we mentioned, it looks a bit like a drain fly larva, but drain fly larvae aren’t usually found in bedrooms since they live and feed on the organic material that builds up in a drain. We think it could also be flea larvae, but again we can’t say for certain. If she has a cat or dog, she might want to investigate this possibility further. Finally, we think it might be a millipede. Upon zooming into the image, we think the specimen might have a segmented body like a millipede. If the specimen has tiny legs, then it is probably a millipede. Of course, these are all just possibilities, we cannot give  a definite identification of the creature. Since she only found one of them and isn’t dealing with an infestation, we recommend she simply place the creature outside and not worry about it too much!

To wrap up, a reader asked us about a black worm-like organism she discovered in her home. We believe the creature is some type of larvae. Although we aren’t sure of its specific identification, we are confident that it isn’t a parasitic worm like she was worried about. That being said, if she is worried about her health we encourage her to visit a doctor as soon as possible!

Article Name
Tiny Worm Found Near Window Probably Not Parasitic
Description
A reader asked us about a black worm-like organism she discovered in her home. We believe the creature is some type of larvae. Although we aren't sure of its specific identification, we are confident that it isn't a parasitic worm like she was worried about.
Author
Dori Franklin
Comments: 0 Posted by: Worm Researcher Dori Categories: Worms Found in the House