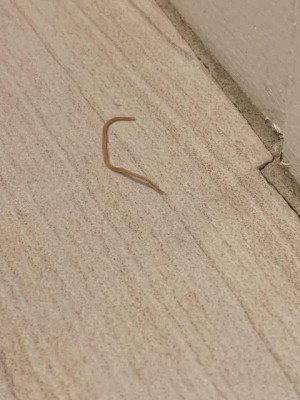 Tiny worms are being consistently found by this reader in his Arizona home. The worms in question appear to be tan in color, and are 1-inch in length, according to our reader. 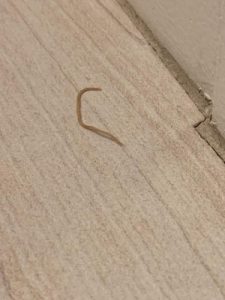 In addition to the photograph, our reader detailed that at first, he only found the worms in his bathroom (specifically in the tub) and its joining hallway, but since then he has found them in the kitchen and laundry room. Our reader hopes that we will be able to provide him an identification of the worm, and we are pleased to say that we do know what this worm is, and that our reader has nothing to fear. It seems as though we cannot escape writing articles about the tubifex worms, which is what these worms are. With more commonplace names like blood worm, sewage worm, or sludge worm, these marine worms are commonly found in the household. They are neither parasitic, nor harmful to humans or animals, but infestations can occur.

As the name ‘sewage worm’ suggests, these critters assemble in sewage systems, and specifically in pipelines, where they feed off decomposing matter and bacteria. Because of this, these worms are often spotted in people’s toilets, sinks, or bathtubs, as they comes up the drain in search of more food. They are often mistaken for earthworms, as they can be tan or pink in color, but are much smaller, and lack the clitellum, which is the band of smooth skin found near the middle of an earthworm. However, like the earthworm, sewage worms are classed as being part of the phylum annelida, which is a category of segmented worms.

Furthermore, it makes sense that these are sewage worms, given that the rooms our reader found them in all have drains that lead to a pipeline system. With respect to the worms found alive in the home, we recommend simply moving them outside to a different body of stagnant water, such as a pond, where they can still thrive and feed off decaying plant material and such. In order to properly deal with a sewage worm infestation, the trick lies in preventing more of them from crawling up one’s drains. They only exhibit this behavior if there is bacteria to be fed upon inside the pipelines, which in turn has them crawling up the drain in search of more bacteria to feed off. Hence, the solution to this problem is simple: consistent cleaning. Bleach, vinegar, or even boiling water are all viable options for substances one can pour down their drains once a week (at least once every other week) in order to prevent the build up of bacteria. As the infestation in our reader’s home is ongoing, we recommend doing this once a day for a week to ensure the elimination of all the bacteria, and then to keep up with this method once a week.

To conclude, the tiny, tan worms our reader found in various areas of his house are sewage worms (tubifex worms)! By cleaning his drains consistently, our reader should have no more sewage worms crawling about his home, as a clean drain has no appeal for this critter.

Article Name
Tiny, Tan Worms in Arizona Home are Sewage Worms
Description
Tiny worms are being consistently found by this reader in his Arizona home. The worms in question appear to be tan in color, and are 1-inch in length, according to our reader.
Author
Worm Researcher Anton
Share the knowledge

This many people searched for this info: 1,711