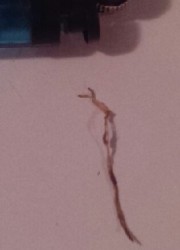 A reader in Indiana recently sent us a question about an extremely tiny, skinny brown worm that her neighbor found in her carpet. (That is, the small worm was found in the carpet of our reader’s neighbor’s house, and our reader is evidently writing to us on her neighbor’s behalf.) The reader described what she found as a “worm like thing,” so it isn’t clear if we are in fact dealing with tiny brown worm in the carpet at all, although she did say it looks a bit like a horsehair worm. What kind of tiny, skinny brown worms can be found in the carpet, or is our reader’s neighbor not dealing with a worm at all?

First, here is the picture we were sent along with the question:

It is slightly hard to see, but the object at the top of the image is a lighter, and thus this creature is, as described above, extremely tiny. However, that is about all we can definitely say about what we are looking at, because a lot about this picture perplexes us. First, it kind of looks like there are two worms in the picture – the upper half of this creature appears to split into two, like a piece of hair with a split end, but this may just be some sort of weird double shadow, with lights shining on the creature from two different directions. On the other hand, weird shadows or not, it looks a bit like two worms intertwined.

One thing we can say is that this is not one of the most common creatures people find in their carpets, carpet beetle larvae, which we have written about dozens of times. Indeed, this doesn’t appear to be any sort of insect larva at all – it doesn’t have any other feature characteristic of insect larva (e.g., legs), and it’s body is too elongated. Speaking of its body dimensions, this doesn’t appear to be a horsehair worm either, which are generally much, much longer than whatever the creature pictured above is.

In truth, we can’t come up with any identification in this case. The creature above is unfamiliar, and in fact we are having trouble making sense of what we are even looking at. If any readers know what this creature might be, please leave a comment below.

Article Name
Tiny, Skinny Brown Worm in Carpet
Description
A reader in Indiana recently sent us a question about an extremely tiny, skinny brown worm that her neighbor found in her carpet.
Author
All About Worms
Comments: 0 Posted by: Worm Researcher Evan Categories: Interesting Worms