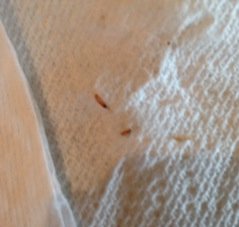 Tiny Brown Worms or Larvae in the Couch

A reader bought a used couch recently and found some tiny brown worms or larvae in it. More precisely, she found the worms or larvae in the lining of the couch, so they had evidently made their way fairly far into the piece of furniture. The reader at first thought she might have found bed bugs, but ruled this out because whatever she found doesn’t have an oval-shaped body like a bed bug. Rather, the creatures she found have more elongated bodies, albeit ones that are very short. She estimates that they are only a few millimeters long. Other relevant body features include darkened heads and some hairs, or “hair-looking things,” that stick out of the end of the creatures’ bodies. What type of worm or larvae did our reader find in her couch?

The picture is a little small, but you can still see it has a tannish or brownish body, and that one end of its body is darkened. If you look really closely, it appears that the hairs are extending from the darkened end of the creature’s body. This is, for the record, the posterior end of the larva’s body, so the darkened part is not actually the creature’s head, as the reader thought, but rather the last abdominal segments of its body.

Like most non-scientific names, “carpet beetle” actually refers to several different species of beetle. Of course, these beetles are related, and so are their larva, but they don’t all look identical. In this instance, the reader’s situation pulls us in different directions as far as precise identification is concerned. What she found looks like a species that belongs to the Trogoderma genus, which are also called “Khapra beetles,” but the environment in which she found them, a couch, is more consistent with her finding of member of the Anthrenus genus, also known as “varied carpet beetles.” The former are known for being pests of stored grains, whereas the latter are what people tend to find in their homes eating various household fabrics, like those found in carpets and furniture. In truth, though, we are talking about fairly small differences, and the appearance of the larvae change as they mature into their adult forms, so it is hard to identify precise species.

So, we can’t be certain she found carpet beetle larvae, but we think there is a fairly good chance this is the case. We have written articles about how to get rid of carpet beetle larvae (this article also links to other good resources), and this may be of interest to our reader. Hopefully the problem is small and that the creatures haven’t taken over the couch. If they have, it might not be worth keeping the couch because you don’t want to introduce the larvae into your house via an infested piece of furniture. We hope our reader doesn’t have anything too serious on her hands, and also that she is able to address the problem easily and successfully.