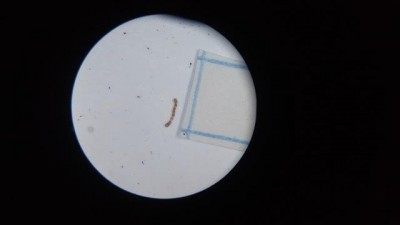 June 30, 2017
One of our readers recently discovered a tiny worm-like organism while studying. It was so small that at first he thought it was just a piece of used eraser, but then the critter began to move. He included some great photos for us to examine. He took them using x10 magnification, and also included a square of paper to use for scale. The square is .5 cm by .5 cm, which makes the worm about .25 cm long. As you can see, it is very tiny: 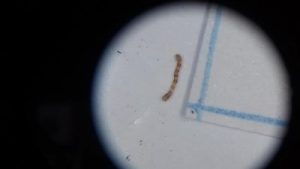 Besides noting the minuscule size of this specimen, we also can see that it has thick brown and tan stripes or segments lining its small body. What is this tiny creature?

Our first thought was that it looks similar to a mealworm. Mealworms are the larval form of the mealworm beetle. These larvae are often considered pests because they feed on stored grains and can be quite a nuisance to get rid of. Mealworms are typically about 2.5 cm long, which is more than twice as large as the specimen in question! We suppose that our reader might have found an infant mealworm that is just especially small. While this is a possibility, we think it is a stretch based on the size discrepancy.

Unfortunately, we aren’t sure what this creature is. Based on its tiny size, we think it is probably some species of larva. Although we write about larva all the time, none of the common types found in a house seem like a good fit for this critter. It doesn’t look like a drain fly larva, pantry moth larva, geometer moth larva (also known as an inchworm), or carpet beetle larva. Since our reader only found one of these specimens, we recommend he bring it outside and not worry about its presence.

To wrap up, a reader found a tiny brown worm-like organisms on a piece of paper. We aren’t sure what the creature is, but we think it is probably some species of larva.

Article Name
Tiny Brown "Worm" is Likely Larva
Description
A reader found a tiny brown worm-like organisms on a piece of paper. We aren't sure what the creature is, but we think it is probably some species of larva.
Author
Dori Franklin
Comments: 3 Posted by: Worm Researcher Dori Categories: Meal Worms