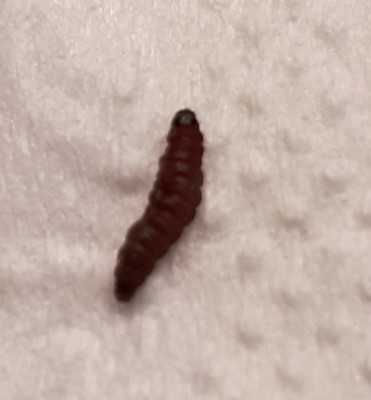 June 7, 2018
Today we will attempt to bring some peace of mind to one of our readers. She found a worm on her toothbrush, curled up and hiding in between the bristles. Yuck!!! She explained that it is about a centimeter long. Its body is reddish-brown with a black head. Since she found the specimen on her toothbrush, she is worried that she might have accidentally ingested one and wants to know if it will make her sick. Here is the picture of the mysterious toothbrush dweller. 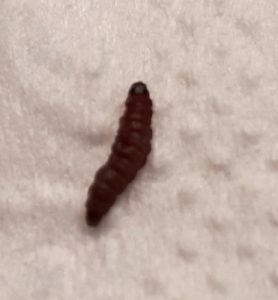 Based on the photograph and the description that our reader provided, we think this creature might be a black soldier fly larva. Black soldier fly larvae, or BSFL for short, are brown larvae that have fat, segmented bodies. Their larval stage lasts for 10-15 days, during which they may grow to be up to three quarters of an inch long. While the physical appearance is a match, we have no idea what a BSFL would be doing hanging out on our reader’s toothbrush.

Unlike drain fly larvae or carpet beetle larvae, black soldier fly larvae aren’t household pests. They do sometimes take over a dirty garbage bin inside of a home, but BSFL prefer compost piles. BSFL are famous for their compositing abilities because they eat decaying organic material. Some farmers even have BSFL colonies since they are so efficient at breaking down high nutrient waste and turning it into animal feed!

As we mentioned, these larvae do sometimes turn up in a home, but it isn’t super common. On one occasion, they appeared after a reader’s dog brought in a dead rabbit. On another occasion, a reader discovered BSFL when there was organic debris sitting in her garbage bin. However, we aren’t sure why a black soldier fly larva would be attracted to a toothbrush. We recommend that our reader investigate her bathroom for more of these organisms, especially near the trash receptacle. Whether or not she discovers additional creatures, we think it would be a good idea to give her bathroom a thorough cleaning. Also, just in case she hasn’t already, we think she should probably throw out her toothbrush.

To wrap up, a reader discovered a small brown larva on her toothbrush. We think it could be a black soldier fly larva. If our reader did eat one of these, we think she can just count it as some extra protein and not worry about how it will affect her health. Of course, if she is truly worried about her well-being or is experiencing any symptoms, then we recommend she see a doctor since we aren’t medical professionals!

Article Name
Tiny Brown Worm Found in Toothbrush Bristles
Description
A reader discovered a small brown larva on her toothbrush. We think it could be a black soldier fly larva. If our reader did eat one of these, we think she can just count it as some extra protein and not worry about how it will affect her health.
Author
Dori Franklin
Comments: 0 Posted by: Worm Researcher Dori Categories: Garden Worms, Worms Found in the House