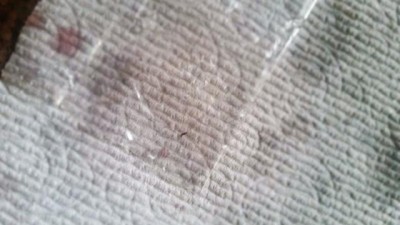 One of our readers found very small brown worms in her home. She said they were on her couch, among some dirt that was sprinkled around. She believes her cat might have brought them into the house, unintentionally transporting them hidden in his long fur.  This is the first time she has seen these tiny creatures. So what are they? Here is the photo she included: 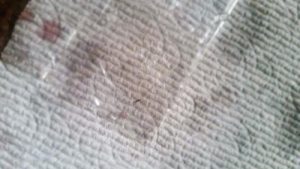 The creature is in the center of the photograph on top of what we think is a paper towel. The pattern on the paper towel emphasizes just how tiny this creature is. We believe that something this small is probably a larva, not a worm. But what kind of larvae has she found on her couch?

Other than knowing they are minuscule and dark brown, we don’t know much else about the larvae. There are numerous species of larvae that are tiny and brown. Some of these species are typically found inside a house, like drain fly larvae and carpet beetle larvae. But there are also many possible specimens that live outdoors, that could have been transported inside via the cat, as our reader suggested.

There is also the possibility that the cat has fleas, and what the reader found is a flea. The specimen is too small to make an identification, but fleas leave behind flea feces know as  “flea dirt”, which could easily be mistaken for ordinary dirt. If our reader thinks her cat might have fleas, she should take him to the vet for treatment. However, we also don’t think this is very likely because fleas and larvae look quite different.

In conclusion, one of our readers found tiny brown larvae on her couch near some dirt. We think there is a small possibility that these are fleas from her cat, but we think it is more likely that the cat brought these larvae in on his fur after rubbing or rolling against the ground outside. We are unable to make a firm identification without a photograph that shows more details of the specimen. Our reader should clean up her couch and brush her cats fur to clean it out.

Summary
Article Name
Tiny Brown Larvae on Couch
Description
One of our readers found very small brown worms in her home. She said they were on her couch, among some dirt that was sprinkled around.
Author
Dori Franklin
Comments: 0 Posted by: Worm Researcher Dori Categories: Cat Worms, Worms Found in the House