Tiny, Brown Creatures All Over the House

“What the heck are these things?!!??!” So starts the frantic query, which was accompanied by a few pictures of a brown worm-like creature, we received a few days ago from a reader. The reader has been finding tiny, brown creatures all over her house – she found them on the wood (like a wall or cabinet perhaps?), on her clothes, and even in her bed. The reader is “freaking out,” as people who find mysterious tiny, brown creatures all over their house can sometimes do. The reader is especially concerned because she suspects these tiny, brown worms (or tiny, brown larvae, most likely) may have been around for a while, but that she failed to notice them because they were so small. She is also moving, and she doesn’t want to take the creatures with her. What is the tiny, brown creature our reader found? Is it some sort of worm, or a larva, or something else entirely?

First, let’s take a look at one of the pictures (the least blurry of the three) the reader submitted with her question: 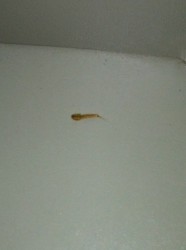 Based on this picture and the reader’s description of the creature she found, we can say with a fairly high degree of confidence that she found carpet beetle larvae, one of the more common pests that people find in their homes. (Readers also ask us about carpet beetle larvae a lot, meaning we’ve written about them several times, including a time when we wrote about a reader who may have found the larvae in her bed, just like the reader we are currently writing to.)

There are a few different carpet beetle larvae species that are common pests, and assuming our reader did in fact find this creature, we suspect she found the larvae of varied carpet beetles (Anthrenus verbasci) because they are a brownish or tan color with darker brown stripes, which appears to be consistent with the creature pictured above. Varied carpet beetles and their larval form are major household pests. The adult beetle generally lays eggs under furniture and baseboards, as well as in closets and air ducts. Once the eggs hatch, the larvae tend to stay out of view, remaining in dark areas of the house that are undisturbed. They feed on various types of organic materials, including certain fabrics, and thus they can cause damage to furniture, clothing, bedding, and, not surprisingly, carpets. They are occasionally found in the kitchen too, often in containers of grains or spices that aren’t tightly sealed, for instance.

Unusually for insects, it can take one to three years for a varied carpet beetle larva to mature into an adult, so if you have these larvae in your house, there is a reasonably good chance you will see them in their larval form at one point or another (simply because they remain in this stage of development for so long). However, they do stay out of site for the most part, which may explain why our reader didn’t notice them for such a long time. To confirm that our reader found varied carpet beetle larvae, she should look for damaged fabrics and molted larvae skins in dark areas of her home, and she should also see if there are gatherings of adult beetles by the window. These are all signs that varied carpet beetles have infiltrated her home.

Since our reader is moving, she is in a somewhat unique position to address the problem. As she is packing, she should stay on the lookout for these creatures, making sure to get rid of any before she packs and moves her belongings. Carpet beetles and their larval form need to be eliminated or their life cycle will begin anew at her new residence. Some of the best ways to prevent an infestation include vacuuming regularly and keeping your clothes washed, organized, and in use. (You shouldn’t have piles of unused, dirty clothes – or even piles of unused, clean clothes – around because carpet beetles may feed of them.) Also, since adult beetles often lay their eggs in bird or insect nests, these should be removed from buildings with regularity. Our reader should do all of these things if she wants to decrease the chances of having another carpet beetle problem at her new place.

We aren’t positive that the tiny, brown creatures our reader found are carpet beetle larvae, but a lot of facts point to this possibility. She should investigate the matter further based on what we have said above to determine whether she is dealing with these creatures. If she is, she should be very careful during her move so that she doesn’t bring the problem with her.