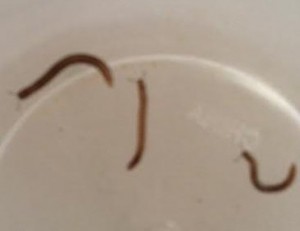 Thousands of Slugs on Outside Walls of House

A reader in the San Francisco Bay area reported that on a recent morning her house was “covered” with “thousands” of worms or larvae. They were on the wood paneling of the house’s exterior, essentially enveloping entire walls. After applying what we can only imagine was a massive dose insecticide, the reader managed to kill all but three of the creatures on her home. So, the problem was essentially taken care of by the time she wrote to us, but she was still curious what she found. She said the creatures looked like snails because of their antennae, but we actually think she found slugs (snails without shells) with tentacles for reasons we will detail shortly.

First, here is the picture the reader submitted with her question:

These are three survivors – the ones who endured the flood of insecticide unleashed upon their now fallen brethren. The picture isn’t especially clear, but you can still make out what appear to be tentacles.

How do we know these are tentacles? We don’t, but if our reader found slugs, as she indirectly implied by saying the creatures look like snails, then these are tentacles. Slugs simply don’t have antennae, but tentacles, even though the two look the same and serve similar sensory functions. What mostly distinguishes slug tentacles is that they are retractable, and that their tips are light sensitive, which essentially makes them very basic eyes.

However, we can’t be certain our reader found slugs because the image doesn’t show us much detail. Most of the slugs we have come across aren’t as skinny and elongated as the creatures pictured above, but the class Gastropoda (composed on snails and slugs) is a large one, containing tens of thousands of different species, so slugs come in many shapes and sizes, including long and skinny. (For the record, the creatures above aren’t long overall – in fact, they are only about six millimeters in length, according to the reader – but they are long relative to their width.) Slugs are also found all over the United States, including San Francisco, and one would be likely to see them, especially in large numbers, after it rains. If the reader’s problem presented itself after rainfall, we think she found slugs. Finally, given the small size of the slugs, it worth mentioning that our reader might have found juvenile slugs that recently emerged from their eggs. Slugs can lay dozens of eggs in one small area, and perhaps this explains the concentration of slugs on the reader’s home.

Without more information or a clearer picture, we aren’t certain of our slug suggestion, but it seems plausible. Whatever our reader found, we hope she will be spared from another massive home invasion.

Article Name
Thousands of Slugs on Outside Walls of House
Description
A reader in the San Francisco Bay area reported that on a recent morning, her house was "covered" with "thousands" of worms or larvae.
Author
All About Worms
Comments: 0 Posted by: Worm Researcher Evan Categories: Pest Worms