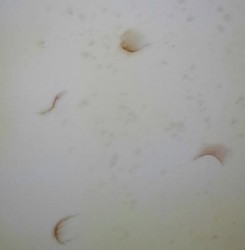 After examining the pictures, we think our reader is probably dealing with midge fly larvae, which are often known as bloodworms. Bloodworms are named for their vibrant red color that is caused by hemoglobin. While these worms can be alarming to look at, they are not harmful to humans, so our reader shouldn’t worry too much!

Bloodworms are often found in aquatic systems, so a shower is a probable environment for them. Bloodworms can be difficult to get rid of because they can withstand temperature fluctuations and are also capable of surviving at low levels of oxygen.

Thoroughly cleaning the inside and outside of this drain is crucial to saying goodbye to these creatures. She will need a plumbing snake or pipe brush and drain cleaner gel that is specifically designed to get rid of organic matter. First she should clean the outside of the drain. Next, pour warm water down the drain to loosen up the grime that is lining the pipes. Then use the drain cleaner and plumbing snake or pipe brush to clean the pipe. The drain cleaner gel must be designed to eliminate organic matter because organic matter is the food source for bloodworms. After cleaning the pipes, she should wait several hours and then pour more water down the drain. This should sufficiently remove any potential food sources and breeding grounds for these creatures.

In summary, our reader found some thin worms in her stand-up shower. We believe these are midge fly larvae, commonly referred to as bloodworms. 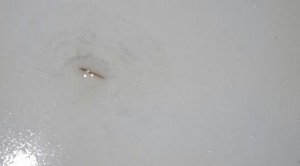 Article Name
Thin Worms in Shower
Description
We recently heard from a reader who found some worms in her shower. She said that after two days they had multiplied and had babies. She said she applied Clorox to the shower, but the worms returned. This has been going on for several months. She included several photos of the long, thin worms. They appear to be orange, red, or brown in color. Since there is nothing to compare the worms to in the photographs, it is difficult to determine the size of these creatures.
Author
Dori Franklin
Comments: 0 Posted by: Worm Researcher Dori Categories: Interesting Worms