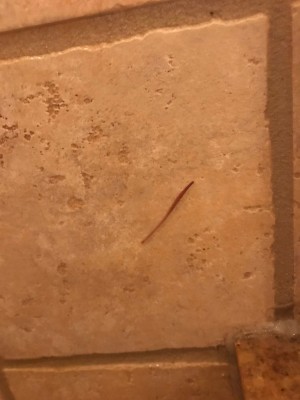 Share the knowledge
One of our readers recently sent us a photo of a creature he found in his shower. He explained that he discovered several of these specimens and hopes we are able to identify them. He described them as 1-2 inches long, thin, and red: 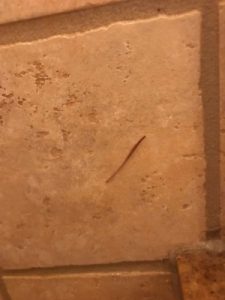 There are two red worm-like organisms that are commonly found in showers (and bathrooms in general.) Earthworms, which vary in color from purple to brown to red, are sometimes found in showers, but most commonly found by readers in their toilets. They have segmented bodies that are several inches long. While there is a small chance that the creatures our reader has found are earthworms, we are fairly confident that he is dealing with the other commonly discovered specimens…bloodworms!

Bloodworms (a.k.a. midge fly larvae) are tiny worms that get their nickname from their striking red color, which is the result of the presence of the protein hemoglobin in their bodies. Like most larvae, bloodworms feed on organic matter. This could be the grime built up in our reader’s shower drain, between the shower tiles, or any other area in his shower. To get rid of these larvae, our reader just needs to give his shower (and bathroom) a thorough cleaning. Although he has only found them in the shower, since this organic grime builds up in sinks and toilets as well, we encourage him to scrub out everything to prevent bloodworms (and other larvae) from appearing in his bathroom. He should use a cleaning agent that is designed to eliminate organic material in order to remove their food source. To prevent future bloodworm infestations, we recommend that he clean his bathroom every 2 weeks!

To wrap up, we believe the small red worms our reader noticed in his shower are bloodworms. Although these larvae aren’t known to carry or transmit human diseases, we still think he should act fast to get rid of them!

Article Name
Thin Red Worms in Shower Could be Bloodworms
Description
We believe the small red worms our reader noticed in his shower are bloodworms. Although these larvae aren't known to carry or transmit human diseases, we still think he should act fast to get rid of them!
Author
Dori Franklin
Share the knowledge

2 thoughts on “Thin Red Worms in Shower Could be Bloodworms”