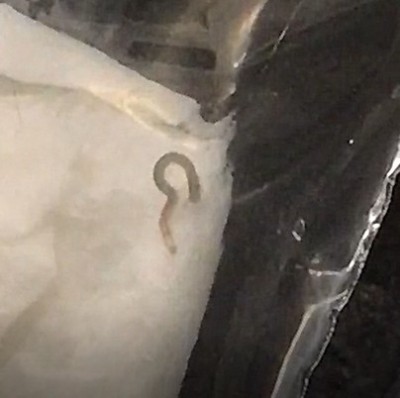 This woman found a clear worm on her shower floor and hopes that we can “shine a light” on what they might be. According to our reader, the worm is about a fingernail’s width in length. 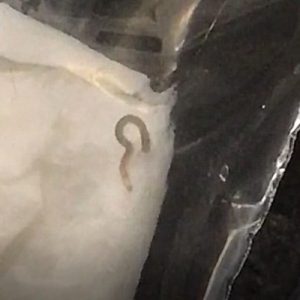 Our reader specifies that she does not think the creature is a pinworm as this one has antennae, which are not visible from the video she sent in (from which the screenshot above was taken). In short, we are not sure exactly what this worm is either, and it is difficult to pinpoint a creature’s exact species when they are this tiny. At first, we thought this might be a newly hatched earthworm, as they can look like this and commonly appear in people’s bathrooms, but given that our reader reports seeing antennae, then this would not be possible. Other transparent worms that often show up in people’s homes include flea larvae and clothes moth larvae, but it would make no sense for either of these species to be found in the shower. One might argue that a flea larva might find its way into a shower on a pet who was bathed in the same shower, but not only do we not know whether or not our reader owns a pet, but flea larvae simply do not look or move like the worm in the video.
Dark Worm Found on Shower Floor

What we can recommend to our reader is taking the worm and keeping it in a container with some food and air holes, and waiting to see what it grows into. The more it matures, the more distinct features it will develop. Once it has grown more, our reader can send us more pictures. Additionally, she can bring the worm to her local county extension office or to the entomology department at a nearby university to get a second opinion. Experts there will be professionally equipped to physically study the worm and identify it. If our reader is concerned about her health, we urge her to consult a medical professional immediately. However, this worm does not resemble any known parasite, so we would assume our reader has nothing to worry about, though of course we cannot promise anything given that we are not medical professionals. The worm somewhat resembles a roundworm, a parasite that commonly infests dogs, but roundworms are more white in color and not as clear as this worm, and so we doubt that that is what it is either. 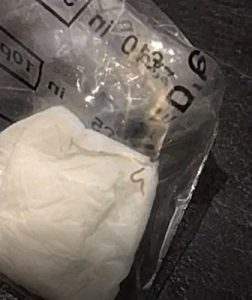 In conclusion, we are not sure what this worm is. It is difficult to tell, given the worm’s minuscule size, but as we said, our reader is free to wait to see what it grows into and send us more pictures so that we have a better chance at identifying it.

Article Name
The Unclear Identity of the Clear Worm Found on the Shower Floor
Description
This woman found a clear worm on her shower floor and hopes that we can "shine a light" on what they might be. According to our reader, the worm is about a fingernail's width in length.
Author
Worm Researcher Anton
Share the knowledge