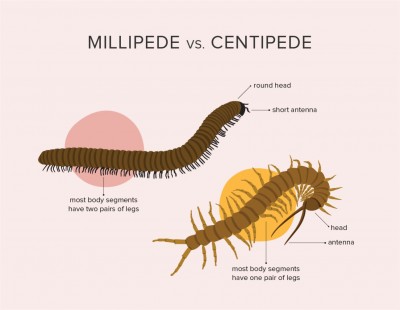 Centipedes and millipedes are two of the most commonly feared creepy crawlers, along with spiders. These long, worm-like creatures both have a multitude of legs, which is what terrifies the many haters of these creatures, and are thus often confused with one another. This article will tackle how centipedes and millipedes are actually distinctly different in a plethora of ways.

For starters, let’s outline the similarities that the creatures do share. They are both arthropods, meaning they have a hard outer shell protecting the inside, which is divided into segments. Both creatures have rows upon rows of legs, all split up into pairs which sprout from these segments. Likewise, their names originate from their possession of so many legs. In Latin, ‘centipede’ roughly translates to ‘hundred foot’, while ‘millipede’ translates to ‘thousand foot’. While neither statement is necessarily true, it gets the message across.

So, where do the creatures differ? Well, to begin with, the easiest way to tell apart a centipede from a millipede is the positioning of the legs. A centipede’s legs extend from the sides of its segments, thus being visible as it crawls around. On the other hand, a millipede’s legs sprout from the bottom of its legs, meaning that oftentimes the legs are not visible to the naked eye, especially regarding smaller species. This difference also becomes apparent in how fast the two creatures can move. Millipedes are quite slow, usually ambling forth at a rate that would make catching one easy. Centipedes, however, are quick creatures, and — depending on the species — are nearly impossible to catch. The common house centipede (which are tiny and usually have only 15 legs) can move at speeds of 1.3-feet-per-second! 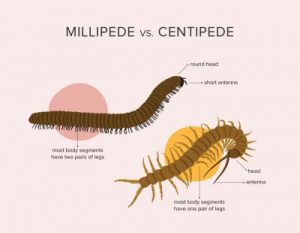 Furthermore, one of the big differences between the two critters is their preferred diet. Millipedes are composting creatures, meaning they feed on decaying organic matter, and then recycle it as they produce a nutrient-rich manure, much like the environmentally beneficial earthworm or redworm. For this reason, millipedes are completely harmless toward mammals and insects alike; they do not bite or sting, and are not venomous. Centipedes, on the other hand, are carnivorous predators. Depending on their size, which in turn depends upon the species, centipedes will kill insects and arthropods, but even lizards, mice, and bats (as in the case of the Peruvian giant centipede). Most species of centipedes are venomous, having venom which they can deliver to their prey through a set of forcipules, which are essentially pincers. While no centipede venom is enough to kill a human if stung, it can still cause mild symptoms or allergic reactions, so we suggest handling centipedes with caution if the need arises.

To conclude, these are the key differences between centipedes and millipedes. We hope that with the help of this article, some of our readers’ confusion will be cleared up and they never have to question which creature is which again, and also that they can be rest assured that neither of the two creatures are necessarily something to fear, though we understand that the mere appearance of a centipede or millipede is enough to be quite startling.

Article Name
The Key Differences Between Centipedes and Millipedes
Description
Centipedes and millipedes are two of the most commonly feared creepy crawlers, along with spiders. These long, worm-like creatures both have a multitude of legs, which is what terrifies the many haters of these creatures, and are thus often confused with one another. This article will tackle how centipedes and millipedes are actually distinctly different in a plethora of ways.
Author
Worm Researcher Anton
Share the knowledge

This many people searched for this info: 1,845