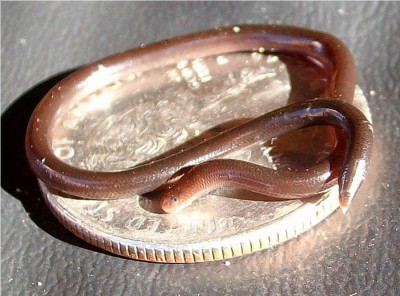 There seems to be no shortage of tiny snakes that people mistake for worms that we can cover in articles. The Barbados threadsnake is so incredibly tiny and incredibly cute, and this article will take a quick look at this quirky critter.

If you were to look up the Barbados threadsnake, the photo you are likely to see is the tiny snake curled up on a quarter dollar coin and fitting inside its perimeter, which immediately gives you a good idea of its minuscule size. This snake reaches a mere maximum length of 4 inches, and is the world’s smallest snake! This snake is part of the family Leptotyphlopidae, which are a family of snakes which burrow underground. They are endemic to the forests of Barbados and were first discovered in the late 1800s. However, it was only correctly identified for the first time back in 2006, so we haven’t really known about them for that long.

Due to these creatures being burrowing snakes, we don’t actually know too much about their behavior. It is thought that the diet of the Barbados threadsnake consists of the larvae of various insects, such as termites and ants. Females will only lay one egg at a time (which resembles a tiny grain of rice), thus making the long-term survival of this snake somewhat questionable. This is because snakes tend to abandon their young after laying their eggs, and placing all one’s bets on the survival of one single offspring is risky, to say the least. That being said, since we do not know that much about the behavior of the Barbados threadsnake, it is unknown whether or not this is the case for this species of snake in particular.

In addition to this, given its size, the Barbados threadsnake is very vulnerable to predators, and does not possess many, if any, defense mechanisms it can use to escape. Then, in addition to this, since the island of Barbados itself is a tiny island in the Caribbean, there can logistically not be that many snakes across the island. Their habitat is also under threat as human development continues to spread across Barbados in the form of mono-cultural farms and vacation resorts. Some sources do consider this snake endangered for this very reason.

To conclude, the Barbados threadsnake is an adorable and rare creature that needs to be protected from extinction! So, if any of our readers happen to travel to Barbados and come across an incredibly tiny worm-like creature, they might consider that it is actually a miniature snake. If any of our readers know of any other worm-like snakes that they would like us to discuss, or have any stories of discovering any, they are free to comment them below!

Article Name
The Incredibly Tiny Barbados Threadsnake
Description
There seems to be no shortage of tiny snakes that people mistake for worms that we can cover in articles. The Barbados threadsnake is so incredibly tiny and incredibly cute, and this article will take a quick look at this quirky critter.
Author
Worm Researcher Anton
Share the knowledge

This many people searched for this info: 1,158