We recently received a picture of a worm (posted below) that was discovered by a reader who was wondering what type of worm she found. The worm was found in a puddle in Indiana, where the reader is from (that is, the reader is from Indiana, not the puddle, presumably). We have long awaited a simple question to answer, as we’ve been dealing with some difficult (and strange) questions as of late, and happily this particular reader’s question is within our ability to identify. We are very confident that our reader found a horsehair worm (sometimes known as “Gordian worms”), which is a nematode or roundworm (also spelled “round worm”).

Horsehair worms are unique creatures with body dimensions that seem almost impossible for a living organism. Horsehair worms are thin, with a body diameter comparable to that of mechanical-pencil lead, and their thinness is exaggerated by their lengthy bodies, which can be up to a foot (about .3 meters) long. They can be even longer – up to a little over three feet (the length of one meter) – although this is rare. Horsehair worms therefore look like horse hairs. Indeed, long ago people thought that horsehair worms were horse hairs that had somehow become alive.

Of course, horsehair worms are not in fact former horse hairs. Rather, they are parasites that live in insects like cockroaches, grasshoppers, beetles, and crickets. (By chance, we’ve specifically written about horsehair worms and crickets fairly recently.) In general, horsehair worms operate like this: a female worm will lay eggs (sometimes millions of them) in a water plant. The eggs will hatch into larvae, which actually live inside cysts in the types of vegetation that grasshoppers, beetles, etc. feed on. Once the larvae are ingested, the cysts dissolve inside the host insect. While inside, the worm will grow and develop by absorbing the nutrients that the insect consumes, a process that takes around four to twenty weeks. After this period, the worm will exit the host through an opening in the insect (like its mouth), although this generally occurs only if the insect is near water, where the worm will crawl to once it has fully emerged from the insect. (The host insect will be killed by the horsehair worm’s presence, but only if the worm reaches maturity.) It is at this stage of the horsehair worm’s life cycle that the reader likely found her worm, which is featured in this picture. 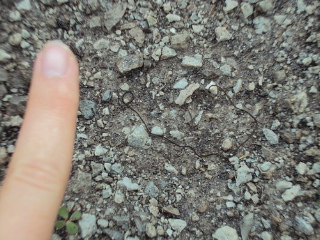 The worm kind of blends into the ground, but if you look to the right of the reader’s finger, you’ll see a thread-like creature curled up on the ground. Again, the reader found the worm in a puddle, so you wouldn’t normally see a horsehair worm lying on dry ground (although it’s possible).

We hope we have successfully addressed our reader’s question. We’ve written about horsehair worms a few times in the past, so check out the archives for more articles on these fascinatingly thin creatures.

1 thought on “The Horsehair Worm”

This many people searched for this info: 9,015