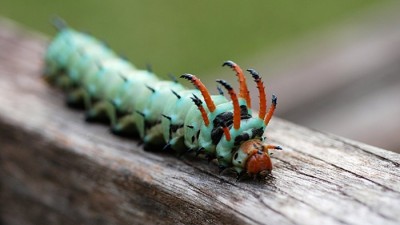 The hickory horned devil is a caterpillar whose name alone would grab the attention of just about anyone, let alone its startling appearance. What’s even cooler about this spiky critter is the fact that it is North America’s largest caterpillar species.

Despite its devilish appearance, the hickory horned devil is actually completely harmless and is safe to handle. That is not to say that allergic reactions are not possible, and caution should be taken when handling any animal for that matter. What can make this caterpillar appear even more frightening is its size, which is often compared to that of a large hotdog. The hickory horned devil can reach up to 5½-inches in length! Their size and bristles do serve a purpose though, which is to scare away predators. They are typically found in deciduous forests across the South-East of the USA, but can also be found throughout all of North America.

The diet of a hickory horned devil consists primarily of leaves from various trees, including ash, pecan and walnut trees, of which they eat plenty to reach the size that they do. They also need to eat as voraciously as they do to store up a sufficient amount of energy to undergo metamorphosis during the pupal stage. Before pupating, hickory horned devils will burrow underground to build their chrysalis, which is dark brown in color. In actual fact, that energy stored during the larval phase has to last them throughout their adult life as a moth as well, as the moth does not eat anything.

To conclude, this has been a brief, albeit — hopefully — informative look at North America’s largest caterpillar, the hickory horned devil. If any of our readers wish for us to write individual articles for any of the other caterpillars mentioned in the article linked above, they can voice their requests in the comments section below.

Article Name
The Hickory Horned Devil: North America's Largest Caterpillar Species
Description
The hickory horned devil is a caterpillar whose name alone would grab the attention of just about anyone, let alone its startling appearance. What's even cooler about this spiky critter is the fact that it is North America's largest caterpillar species.
Author
Worm Researcher Anton
Share the knowledge