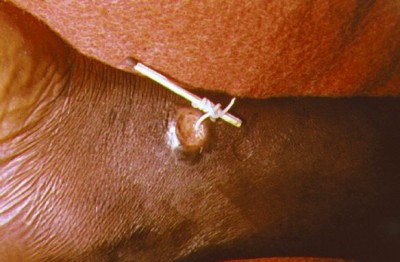 The Guinea Worm (Dracunculus Medinensis), the largest worm of the tissue parasite affecting humans, is often referred to as the “fiery serpent”, most likely because of the debilitating and painful disease it causes known as “Guinea worm disease” (dracunuliasis). This disease typically affects the most depressed areas of Africa and the Saharas, but has also been found in the Middle East, Asia, Arabia and among some of the world’s most struggling people.

The life and survival of the Guinea worm is unique in many ways, often requiring a year for full development of the parasite. The cycle of the Guinea worm begins with the female, often measuring upward of a meter in length while barely 2mm in diameter. The female worms are found in or under the skin of the host: humans. As the female nears the later stages of pregnancy, she begins to fill with numerous embryos; the female is usually found in the feet, ankles, or legs. The female’s body ruptures, releasing the juvenile worms into the host’s skin and resulting in an intense and painful allergic reaction, eventually forming a papule or cyst on the skin. In time, the papule bursts open, exposing the juvenile worms and female worm providing the opportunity to move to another host. Human hosts infected with the guinea worm often use water to cleanse the infection and soothe the pain, providing the parasite the opportunity to transfer to water. An intermediate host, a copepod, eats the guinea worm and drinking this same water infects the human host. 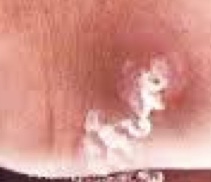 The cycle is by no means over, however. Once the parasite is back in the human host, the juvenile worms travel from the intestinal tract, through the abdominal cavity, and into the subcutaneous connective tissues. Here, the males fertilize the females, and the males die. The females will then migrate to the surface, the skin, develop further and reach sexual maturity, and finally start the process all over again.

As would be expected, serious complications occur from the dracunuliasis. The sores that are produced when the skin ruptures, are often susceptible to bacterial infections and abscesses. At times, the worm may not find its way to the skin, and areas around joints are prey to chronic arthritis. Because there is no vaccine or immunity to infection, humans are often re-infected. And while there a variety of drugs used to treat dracunuliasis, the most common form of treatment is to simply attach the female worm to a stick and wind.