Tan “Worm” on Sidewalk is Not a Parasite

We just received a few photographs accompanied by the question, “Is this a parasite?” Here are the photos: 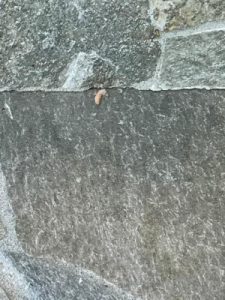 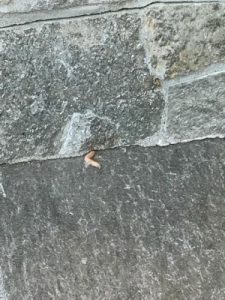 Besides the pictures, our reader didn’t give us any other details about the specimen. It is tan and looks to be on the larger side considering the general size of worms and worm-like organisms. We don’t know where our reader came across this critter, but we think a good guess is that she found it somewhere outside. Perhaps crawling from the sidewalk to a small hole in a stone wall. So is this a parasite?

No, we don’t think this a parasite. Parasites live in or on another organism, known as the host, and benefit by stealing nutrients or resources from the host. The presence of a parasite often negatively affects a host and can cause its health to decline. To give an example, tapeworms are well-known parasites. Tapeworms live inside the intestines of some animals, including humans, and feed on the food the host is digesting. Another common example is the flea, which feeds on the blood of its feline or canine host.

If the critter our reader found isn’t a parasite, then what is it? We can’t say much about its appearance. We know the color, but we can’t determine the texture or if it has any other identifying features like legs, antennae, or a prominent tail. Considering the photo, we think the creature might be a slug or a caterpillar.

There are tens of thousands of species of caterpillars known around the world. Several of the species might fit the description of the creature our reader discovered. Generally, caterpillars feed on foliage until they eventually mature into butterflies (classifying them as larvae, not worms). Sometimes caterpillars are considered pests because of the damage they cause by eating crop plants.

There are also thousands of different species of slugs in the world. Slugs are mollusks, not worms, and they play an important role in the ecosystem. Like caterpillars, slugs can be called pests because they can damage garden and crop plants.

While we aren’t sure if the specimen our reader found is a caterpillar or slug (or something else entirely), we are quite confident that it isn’t a parasite. If any other readers have some thoughts about the identification of the critter in the photos, we invite them to share their ideas by commenting on this article! 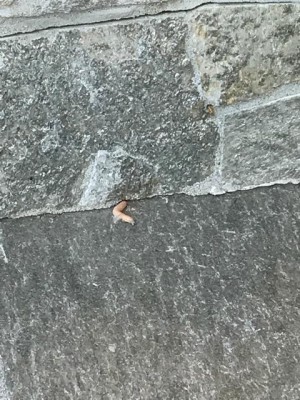 Article Name
Tan "Worm" on Sidewalk is Not a Parasite
Description
A reader reached out to us about a worm she thought might be a parasite. We believe it is probably a slug or a caterpillar.
Author
Dori Franklin
Comments: 0 Posted by: Worm Researcher Dori Categories: Caterpillars, Parasite Worms