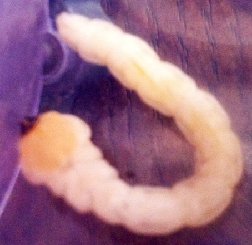 Larvae that Bore into Wood

Today we received a question from a reader about a white, segmented larvae with a large head that she found on a poplar tree stump in her backyard. (Technically, the reader said she found a “worm bug like thing,” but since we know she found a larva, we’ll refer to it accordingly.) The most notable feature of the larva is its large head, which looks like it is designed to bore into wood, and indeed it is, as we are pretty certain our reader found some sort of wood-boring larva – either the larval form of a beetle (one of the woodboring beetles) or of a moth (e.g., a clearwing moth). The reader was only curious about identifying what she found – she indicated that she has never seen anything like it – so below we explore larvae that bore into wood in more detail.