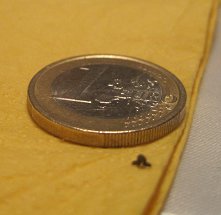 A couple of weeks back, we received a question from a reader about some very small worms (actually, “very” perhaps isn’t quite strong enough of a word – they are more like extremely small worms) that were found on her bathroom wall near the ceiling. The reader sent us two pictures of the extremely small worms, which are probably not worms at all, but rather some type of larvae. Even by larvae standards, these larvae (if they are larvae) are very small. The reader only wanted to know what these little creatures are (worms? larvae? something else?), which is a modest inquiry, but a difficult one just the same.