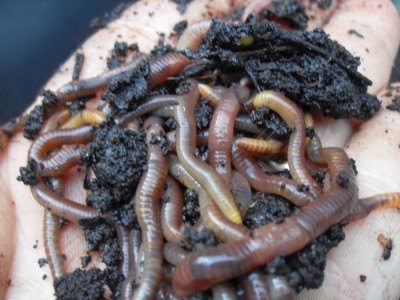 Want to Get Rid of Them? Just Make Them Uncomfortable.

We received a rather brief inquiry from a reader, with no accompanying picture. The question is: “How do you get… 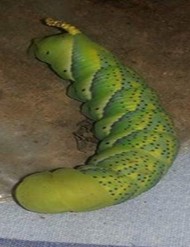 Mysterious Visitor is a Hornworm Caterpillar

A woman sent us the photograph below of a handsome green critter she found in her garden, with the simple request that we identify it. Luckily, it’s a great photograph, and gives us some great clues about its identity. We can see several distinct characteristics to help us identify the species. The way the critter is segmented is helpful, as are the black spots on its body. But the most telling traits are the horn seen at the top of the picture and the stripes on the side of its body. 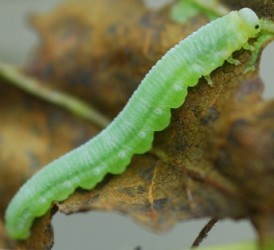 Small Green Worms in the Garden

A reader (or, technically, the daughter-in-law of a reader who wrote in on her behalf) found some small, green worms in her garden. She recently moved into a new house and was doing some preliminary gardening work when she found the “tiny green worms,” to use the reader’s precise wording, and she was wondering what they might be. We’ll do our best to assist, starting with this: the small, green worms our reader found might have been small and green, but they almost certainly aren’t worms. Rather, they are probably insect larvae, or possibly caterpillars, both of which are commonly mistaken for worms, which is actually a scientifically imprecise term.

Green Caterpillars in the Garden

A little while back a reader sent us a photo of a green caterpillar in his garden. He’s found several of the green caterpillars as of late, and he was seeking more information about them. The reader has already done some research and indicated that he thought he found “tomato worms” (based on other information, we can confidently assume he meant “tomato hornworms”, which are actually caterpillars), in large part because the creatures were on his tomato plant. He was most puzzled about the webs they seemed to be spinning for themselves, and he also wondered if the “worms,” once enmeshed in a web, had died. What are these green caterpillars, if they even are caterpillars, and what’s the deal with the webs they are creating?

Two of the most popular types of horn worms are the tomato horn worm and the tobacco horn worm. These worms consume large amounts of plants and vegetables.

Adult tomato horned worms are typically 3 to 5 inches long and they have a large black horn on their rear ends. This horn may look like it can do plenty of damage, but its actually quite harmless.