How to Identify the Species of a Generic, White Larva

Small, white worm-like creatures were found by this reader in his Washington home. The worms were found next to his dog, who was lying on a chair, and the worms moved by “contracting and stretching its body.”

The other night a reader found “a tiny white worm with what looked like a reddish brown head” in some precooked ham she bought. The reader bought and cooked (or technically recooked) the ham for dinner, and the following day she found the worm when eating leftovers. She looked through all the ham, but was only able to find one of the worms. The reader was wondering if we have any idea what the tiny white worms with the red or brown head might be. 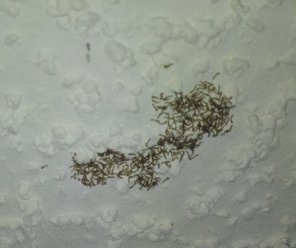 Swarm of Tiny White Worms with Black Heads on Ceiling

Recently we received yet another question about tiny white worms with black heads. This time, the small worms (or more likely larvae) were in a swarm on the ceiling. There are probably at least a hundred worms or larvae in the picture we were sent, and they are all in a small area of the ceiling, tightly packed together. The reader indicated that we had tentatively identified similar creatures in the past as moth fly larvae, and was wondering if the small white worms (or larvae) with black heads that he found are moth fly larvae.

A reader sent us a simple question a little while ago – “is this wireworms?” – in connection with a video that depicts small white worms crawling out of potatoes soaking in water. These small white worms could be wireworms (or “wire worms,” as some have it), but they could also be potato tuberworms, which are also called “tobacco splitworms” (or more precisely Phthorimaea operculella). To call the worms “small” doesn’t quite capture their size; they are more like tiny white worms, only a few millimeters long and very skinny. This can’t really be seen, but the profanity-infused narration of the video indicates that the tiny white worms are actually coming out of the potatoes, evidently only after they were placed in water. From what we can tell, the worms coming out of the potatoes look more like potato tuberworms than wireworms, but we touch on both possibilities below.