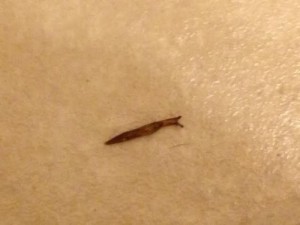 Slimy creature in Colorado home is a slug

One of our readers sent us a picture and a video of a slimy creature that she found in her home. She said it was in the bathroom very close to her dog. She said that when it moves, it bunches itself up by pulling its head toward the middle of its body and then it extends its head. She also mentioned that she lives in Colorado. After looking at the picture and the video, we have determined that this slimy creature is a slug.