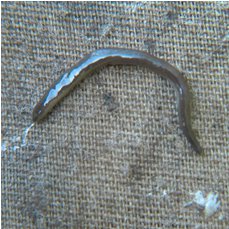 We received an extremely detailed question about a worm a while back from a reader in England. The reader has been trying to identify the worm, which is gray and slimy, for the past nine years (since April 14th, 2006, to be exact). The reader found the creature under a discarded pillow in Holywells Park in the town of Ipswich, which is in Suffolk, England. (He even gave us an Ordnance Survey National Grid reference, a British geographic grid reference system, so that we could pinpoint the exact area where he found the worm.) The worm leaves a “slim-trail” behind it when it moves. The reader thought be might have found a “Worm Slug,” or Boettgerilla pallens, but he has since ruled out this possibility. What kind of slimy, gray worm is our reader finding?