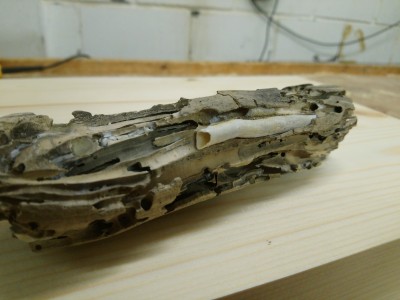 What Creature Was Calcified in Old Wood?

We believe the calcified worm our reader found is a dead shipworm! These specimens are found all over the world and are known for burrowing into shipwrecks and feasting on decaying wood.

What Did Shipworms Eat Before There Were Ships?

A reader asked us a very interesting question a while ago: what did shipworms (or “ship worms”) eat before there were ships, boats, piers, and other human-made wooden structures in the sea? Shipworms, the “termites of the sea,” are known for their destruction of wood via boring, and since they are saltwater creatures, ships and other such structures are often on the receiving end their furious drilling. However, as the reader observes, there must have been much less wood in the ocean before humans started putting it there, so what did shipworms eat before we supplied them with a food source?

As the shipworm grows, it lengthens its burrow, lining it with a calcareous (calcium) layer secreted by the mantle. Teredo includes about 15 species and it is the most damaging of all shipworms.

The shipworm is an interesting creature. It has a strong appetite for wood and the unusual ability to tunnel through it, creating the most unusual patterns and holes.