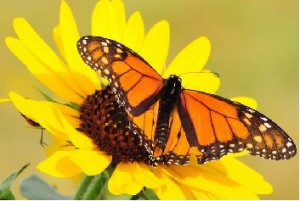 One of our readers sent us an email asking about a specific caterpillar that has yellow stripes. This caterpillar was eating one specific plant in her yard and it is about an inch in length. This is a very tough one because this caterpillar could be a number of species. There are about 180,000 species of caterpillars in the world, so without a picture, this has been a hard one to determine.

Nearly One Billion Monarch Butterflies, 90 Percent of Population, Have Disappeared Over Past 25 Years

If any insect can be called iconic, it is the monarch butterfly. The butterflies, with their large orange and black wings, are easily one of the most recognizable insect species in the United States, and they have been a familiar sight around much the country for generations. But the monarch butterfly is now threatened like never before. Over the last 25 years, nearly one billion butterflies have disappeared, a population decrease of over 90 percent. There are only about 30 million monarch butterflies left, and they are now at the center of $3.2 million restoration effort and may soon be listed as a threatened species under the Endangered Species Act. How did we get here?