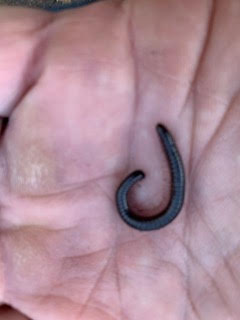 “I found a bunch of these worms on a golf course green. Can you tell me what they are?” asks this reader, who sent in a lovely photograph of a tiny, segmented creature. The creature is black in color, with a long, tubular body, and looks like a millipede.

Black-striped Worm is a Pheretima Earthworm

This frighteningly long worm was found by this woman who wonders if we could help identify it. The worm in question appears to be wrapped around some sort of concrete post, and sports a glossy, black body with darker stripes at regular intervals, with a reddish head at the end visible in the photograph.

A very friendly reader by the name of Warron wrote to us recently to ask about a worm he found. Helpfully, he included a nice, large photo of the worm, which you’ll find below. The worm is black, or possibly a really dark brown, and it appears to be rather long, although it is hard to be certain of this because there isn’t an object by which to approximate the length of the worm. What is the (possibly) long, black worm?