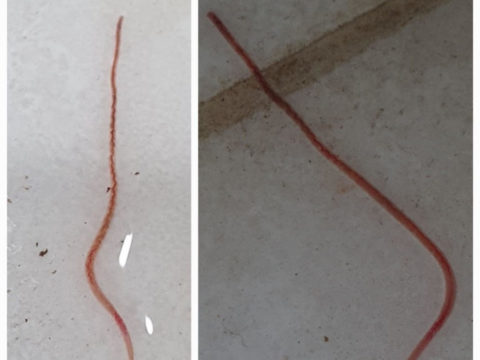 Long, Red Worm Found in Bathroom After Leak is Either an Earthworm or Bloodworm

“I found this in my bathroom where the water is leaking from the water sprayer”, states this reader in her submission regarding the long, red worm-like organism pictured below. “When I was cleaning the bathroom I found the first one. I asked my family to get rid of it because, frankly, I can’t stand worms or insects anyways. They did get rid of it and I thought that this was over with, but apparently not because today I found another one in the exact same place. I am so very concerned as to where it came from. Any help you could provide would be very much appreciated. I’m from Iraq. I don’t know if my country has any factors that could lead up to this, but just in case you needed that info. Thank you in advance.

Worm-like invasion in the shower could be earthworms

One of our readers is very concerned about the worm-like creatures that are invading his daughter’s home. He said that she has orange worms coming out of her shower walls. He described them as being about three inches in length, long and round. He did mention that she lives in east Texas and just wants to make sure that they are not dangerous to her health. He did not include a picture with his email, so it is difficult to identify these worms.

Earthworms in the Shower?

A reader wrote to us recently about some worms that she found in her shower. As she notes, they look like earthworms, but they are “smaller and thinner.” The reader is uncertain how they ended up in her shower, but she offers some speculation: they might have come from the drain, or she might have brought them in herself, maybe in her hair, as she took a shower after taking a hike. Our reader is wondering what she found, and she is also wondering if she should be worried about the worms that turned up in her shower.