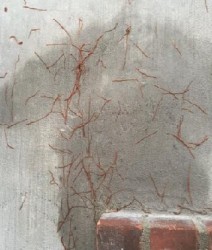 We received a photo from a reader that appears to depict a few dozen dried worms on some concrete surface, perhaps a driveway, or maybe a sidewalk leading up to a front door. (“Dried worms” sounds almost like some sort of snack, so maybe “dried-up worms” or “dried-out worms” is a better way to describe them.) Normally, we would say the reader asked a question about the dried worms on the driveway or sidewalk or whatever concrete surface we are looking at, but no question was asked. In fact, no text was supplied whatsoever – the picture was submitted and nothing else. We can’t divine exactly what our reader is looking for from us, but context suggests we take his message as an unspoken question of identification. What are the dozens of worms on the concrete, and how did they get there?